Here is a growing list of examples from modern misogynists. 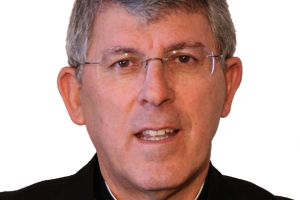 celibate man that believes in a ghost

Domestic violence is caused by women ‘not obeying men’ and that wives could escape being physically abused by not asking for divorce.

He told churchgoers in his sermon: “The majority of cases of domestic violence happen because the woman’s partner does not accept them, or rejects them for not accepting their demands.

“Or often the macho reaction comes about because she asked for a separation.”

He also said many relationship problems occurred because the couple were not in a ‘true marriage’, and he criticised the practice of ‘quickie divorces’.  [source]

The Archbishop decides to confront the serious problem in St. Louis.  The Girl Scouts of the USA.

“Girl Scouts is exhibiting a troubling pattern of behavior and it is clear to me that as they move in the ways of the world it is becoming increasingly incompatible with our Catholic values,” Carlson wrote in a letter dated Thursday. “We must stop and ask ourselves — is Girl Scouts concerned with the total well-being of our young women? Does it do a good job forming the spiritual, emotional, and personal well-being of Catholic girls?”  [source]

Can’t have those little ladies learning the facts about how to prevent pregnancy and sexually transmitted diseases!

Robert Carlson is the same Archbishop that in a June 2014 deposition claimed to be uncertain if he knew sexual abuse was a crime or not.  [source]

Strip women of their right to vote and confine them to the home.  No divorce either.

August 2016 – Men Rule Over Women at Home, and I’ll Am Wrestle Any Woman Here who Disagrees

Women and girls are responsible for the fall in vocations to priesthood.  [source]

Qualifications to be President?  You must be Christian and you must have a penis. [via FriendlyAtheist]

What should be look for in our elected officials?… The first qualification is they must be a Christian… What a candidate professes about God is absolutely critical. It will profoundly shape his leadership. Genuine reverence for the Lord is the foundation of knowledge… So we need a leader who is alive spiritually and who will lead in the fear of God.

The biblical biological requirement for office is you must be male. Civil leadership should be conceived of as an extension of the family and God’s created order. God established man as the head of the woman and woman as his helpmate… In society, the same roles apply as is ordained in the family and in the church.

The ministry of justice that God has given to the state is generally a man’s job. Yet, there are exceptions in the Bible where God has raised up women like Deborah to judge and even deliver Israel. But it’s considered an indictment when there’s no strong, godly men to lead and protect their families and society. 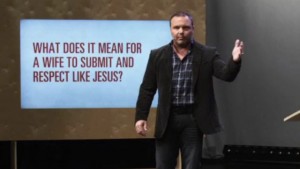 Women who are quarrelsome, who are nags, they are not submitting in accordance to the Bible. [huffpost]

Knowing that His penis would need a home, God created a woman to be your wife and when you marry her and look down you will notice that your wife is shaped differently than you and makes a very nice home.  Written by Driscol under the name William Wallace II in 2001

Women will be saved by going back to that role that God has chosen for them. Ladies, if the hair on the back of your neck stands up it is because you are fighting your role in the scripture.  Sermon 2008

Without blushing, Paul is simply stating that when it comes to leading in the church, women are unfit because they are more gullible and easier to deceive than men. While many irate women have disagreed with his assessment through the years, it does appear from this that such women who fail to trust his instruction and follow his teaching are much like their mother Eve and are well-intended but ill-informed.

A wife who lets herself go and is not sexually available to her husband in the ways that the Song of Songs is so frank about is not responsible for her husband’s sin, but she may not be helping him either.

We live in a completely pussified nation. …Watch a nation of men be raised by bitter penis envying burned feministed [sic] single mothers who make sure that Johnny grows up to be a very nice woman who sits down to pee.  Wayback Archive

Hell looks like a good place because at least a man is in charge, has a bit of order and let’s men spit and scratch as needed.

A wife is to submit graciously to the servant leadership of her husband, even as the church willingly submits to the headship of Christ.  – Official Statement

Males have a tendency to wander a little bit. And what you [women] want to do is make a home so wonderful he doesn’t want to wander.

On a man with an Alzheimer’s stricken wife:  I know it sounds cruel, but if he’s going to do something, he should divorce her and start all over again, but to make sure she has custodial care and somebody (is) looking after her.

I know this is painful for the ladies to hear, but if you get married, you have accepted the headship of a man, your husband. Christ is the head of the household, and the husband is the head of the wife, and that’s the way it is, period.

The feminist agenda is not about equal rights for women. It is about a socialist, anti-family political movement that encourages women to leave their husbands, kill their children, practice witchcraft, destroy capitalism and become lesbians.  Fundraising Letter July 1992

When a caller complained that his wife insults him and once raised a hand to him, Robertson lamented the end of legal wife-beating. “I don’t think we condone wife-beating these days but something has got to be done,” he whined. After characterizing the wife as someone who “does not understand authority,” he “jokingly” recommended that the husband move to Saudi Arabia, so that he can legally batter her. [Alternet]

The Holiness of God is not evidenced in women when they are brash, brassy, boisterous, brazen, head-strong, strong-willed, loud-mouthed, overly-talkative, having to have the last word, challenging, controlling, manipulative, critical, conceited, arrogant, aggressive, assertive, strident, interruptive, undisciplined, insubordinate, disruptive, dominating, domineering, or clamoring for power. Rather, women accept God’s holy order and character by being humbly and unobtrusively respectful and receptive in functional subordination to God, church leadership, and husbands.  Women in the Church, 1999

Don’t you be ashamed you go to a church with male leadership. Every church that’s right with God oughta have a sign: “Male Leadership.” Because that’s the only kind of leadership, both from Adam all the way to the last part of the Bible. It’s all been male. This is a man’s world!

Hillary couldn’t win a popularity contest if she was the only contestant. The Hideousness Factor: Lyndon Baines Johnson was the last profoundly ugly candidate to be elected president, and he was a legacy of the martyred JFK. Voters don’t want a leader who looks frazzled or frumpy.  -Column titled “Top 10 Reasons Why Hitlery Will Never Be President” [via JoeMyGod]

“There is a divine hierarchy in marriage,” Ray explained, reading from the book of Ephesians. “Wives submit to your own husbands as to the Lord. For the husband is the head of the wife, as also Christ is head of the church.”  And then he added a message from the book of Timothy: “I do not permit a woman to teach or to have authority over a man, but to be in silence.” 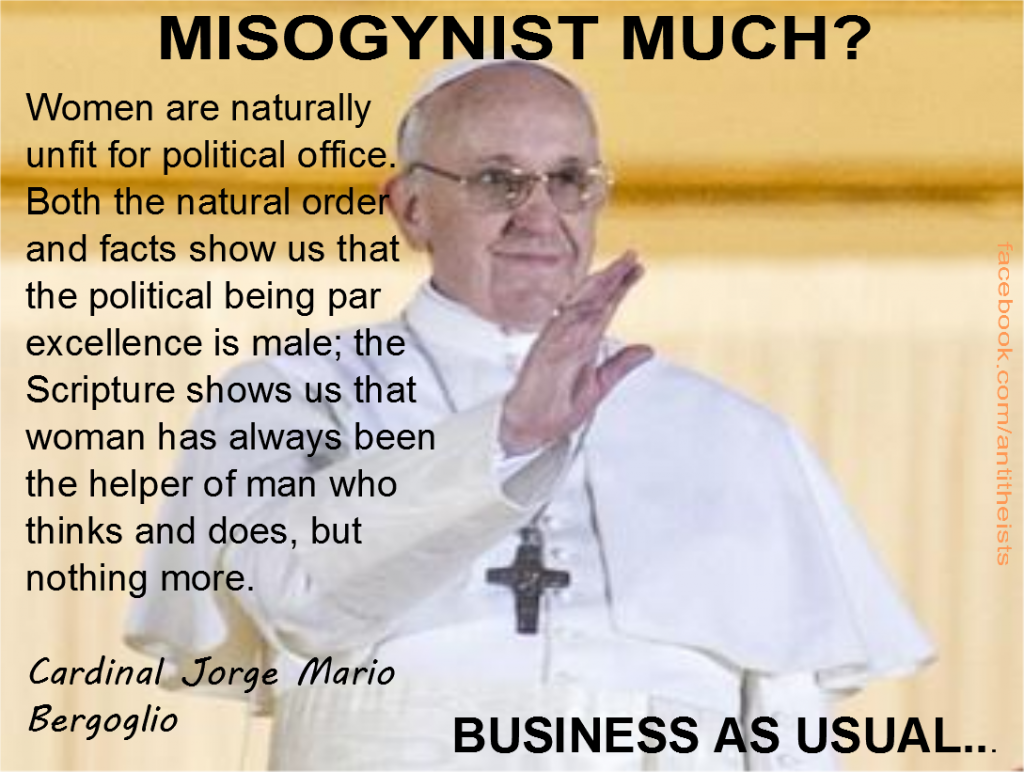