Keep the Goddess Eostre in Easter 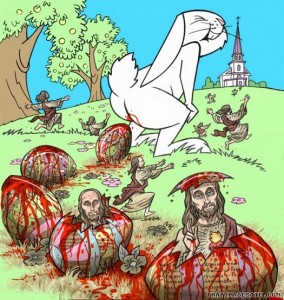 Ancient peoples had celebrated Easter during the vernal equinox long before the superstitious myths of Judaism and Christianity.

“And Jesus did melt the cocoa into the shape of an egg and then did feast with the local villagers.  Corinthians 6 12-13

No.  That never happened.

Nothing about the Easter bunny, marshmallow peeps, or colored eggs derives from Christianity 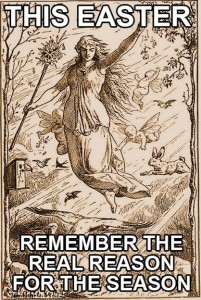 The name “Easter” originated with the ancient pagan Goddess known as Eostre, according to Saint Bede the Venerable‘s (c673-735) book De temporum ratione, (The Reckoning of Time).  Eostre, the Teutonic goddess of spring and fertility was worshiped by the Northern European Saxons.  She was also known by many names, such as: Ostare, Ostara, Ostern, Eostra, Eostur, Eastra, Eastur, Austron, and Ausos.  Her name was derived from the ancient word for spring and represented fertility, the sunrise and the renewal of life.

Similar deities were celebrated by other names in ancient Mediterranean cultures in the springtime through the centuries and separated by great distances: Aphrodite, Ashtoreth, Astarte, Demeter, Hathor, Ishtar, Kali, and Ostara.

People celebrated Eostre’s festival on the day of the vernal equinox. The tradition and symbolism evolved over time and survives in the rabbit (symbol of fertility) and in colored eggs (painted with bright colors to represent the sunlight of spring).  The eggs were often rolling contests or given as gifts. Even the early Egyptians and Persians dyed eggs and gave them to friends or placed eggs at grave sites. 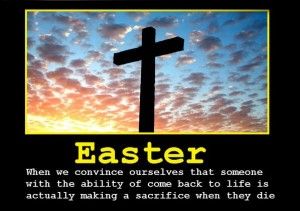 The Roman emperor Constantine, who is mostly responsible for the rise of Christianity, presided over the first Council of Nicea, in approximately the year 323 CE. After declaring Christianity the “official religion” of the Roman Empire, Constantine gathered all of the bishops in Rome to make final decisions on a lot of questions that Christians at the time had. One of these decisions was the deity of a man named Jesus, from the town of Nazareth; the Council of these bishops had to vote on whether or not Jesus was to go down in history as the actual son of god, a deity, a higher power; or, decide to leave him as what most people at the time believed, that he was a preacher with a very large following.

The council also decided on when to celebrate the alleged resurrection: Easter was to be celebrated on the first Sunday after the first full moon after the equinox.  The festival commemorating the cruci-fiction of Jesus Christ was effectively grafted onto the same dates of the older pagan celebrations.

So it took over 300 years before the date of the Easter celebration was decided… by committee.

Christian “scholars” have debated the date of Jesus’ cruci-fiction for centuries. No credible physical evidence has ever been found that Jesus was crucified on Mt. Calvary or for his actual existence for that matter.

The myth of Jesus and the alleged resurrection contains a huge number of contradictions. 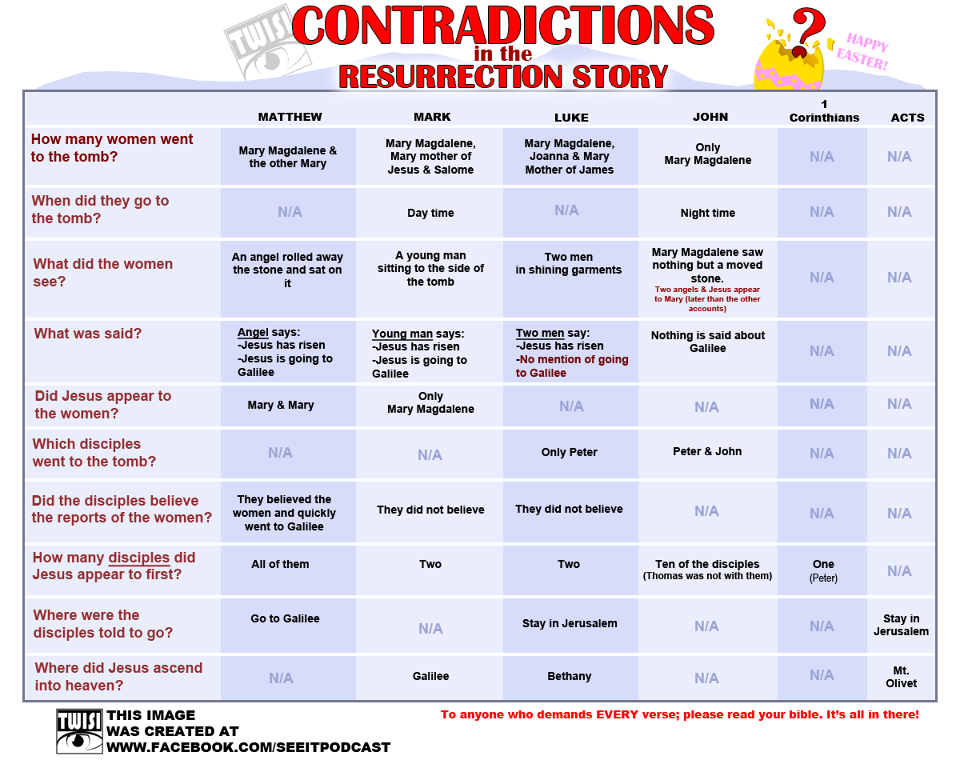