The 42 Commandments of Ancient Egypt 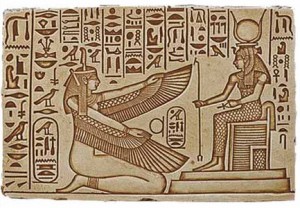 The Ten Commandments, eight of them at least, were taken from the Egyptian Principles of Ma’at written at least 2000 years earlier.

Written at least 2,000 years before the Ten Commandments of Moses, the 42 Principles of Ma’at are one of Africa’s oldest moral and spiritual instructions.  Ma’at, the Ancient Egyptian divine Principle of Truth, Justice, and Righteousness, is the foundation of natural and social order and unity. Ancient Africans developed a humane system of thought and conduct which has been recorded in volumes of African wisdom literature, such as, these declarations from the Book of Coming Forth By Day (the so-called Book of the Dead), The Teachings of Ptah-Hotep, the writings of Ani, Amenemope, Merikare, and others.

One aspect of ancient Egyptian funerary literature which often is mistaken for a codified ethic of Ma’at is Chapter 125 of the Book of the Dead, often called the 42 Declarations of Purity or the Negative Confession. These declarations varied somewhat from tomb to tomb, and so can not be considered a canonical definition of Ma’at. Rather, they appear to express each tomb owner’s individual conception of Ma’at, as well as working as a magical absolution (misdeeds or mistakes made by the tomb owner in life could be declared as not having been done, and through the power of the written word, wipe that particular misdeed from the afterlife record of the deceased).

Many of the lines are similar, however, and they can help to give the student a “flavor” for the sorts of things which Ma’at governed—essentially everything from the most formal to the most mundane aspect of life.

Many versions are given on-line, unfortunately seldom do they note the tomb from which they came or, whether they are a collection from various different tombs. – wiki

Here is a different translation showing how they correlate with the 10 commandments.

Moses, if he even existed at all, (there is no undisputed historical/archaeological evidence that he did), was an Egyptian.  According to the myth, he was adopted by an Egyptian royal family.  If that were true he would have been familiar with these principles.

As there is no real evidence of a historical Moses, then others most likely borrowed a few if the Principles of Ma’at when composing the Ten Commandments.