The Bible, especially the Old Testament, is filled with numerous stories of animal and human sacrifice.  God likes the pleasing aroma of burning flesh!

Animal sacrifice is much more common than human sacrifice, but both occur and are “pleasing to the Lord”. 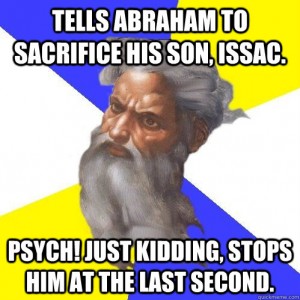 Take your son, your only son – yes, Isaac, whom you love so much – and go to the land of Moriah.  Sacrifice him there as a burnt offering on one of the mountains, which I will point out to you.  Genesis 22:1-18

Abraham takes his own son up on a mountain and builds an altar upon which to burn him.  He even lies to his son and has him help build the altar.  Then Abraham ties his son to the altar and puts a knife to his throat.  He then hears god tell him this was just a test of his faith.  HAHA, J/K LOL.  However, god still wanted to smell some burnt flesh so he tells Abraham to burn a ram.

Even though Abraham does not kill his son, it is still an incredibly cruel and evil thing to do.  If Abraham did that today he would be in jail serving a long sentence.

It is stunning Christians see this story as a sign of their God’s love.  There is no love here, just pure unadulterated evil. 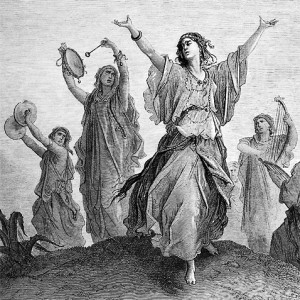 “At that time the Spirit of the LORD came upon Jephthah, and he went throughout the land of Gilead and Manasseh, including Mizpah in Gilead, and led an army against the Ammonites.  And Jephthah made a vow to the LORD. He said, “If you give me victory over the Ammonites, I will give to the LORD the first thing coming out of my house to greet me when I return in triumph.  I will sacrifice it as a burnt offering.“

“So Jephthah led his army against the Ammonites, and the LORD gave him victory.  He thoroughly defeated the Ammonites from Aroer to an area near Minnith – twenty towns – and as far away as Abel-keramim. Thus Israel subdued the Ammonites.  When Jephthah returned home to Mizpah, his daughter – his only child – ran out to meet him, playing on a tambourine and dancing for joy.  When he saw her, he tore his clothes in anguish.  “My daughter!” he cried out.  “My heart is breaking!  What a tragedy that you came out to greet me. For I have made a vow to the LORD and cannot take it back.”  And she said, “Father, you have made a promise to the LORD.  You must do to me what you have promised, for the LORD has given you a great victory over your enemies, the Ammonites.  But first let me go up and roam in the hills and weep with my friends for two months, because I will die a virgin.”  “You may go,” Jephthah said. And he let her go away for two months.  She and her friends went into the hills and wept because she would never have children.  When she returned home, her father kept his vow, and she died a virgin.  So it has become a custom in Israel for young Israelite women to go away for four days each year to lament the fate of Jephthah’s daughter.”   Judges 11:29-40 NLT

[The Lord speaking]   The one who has stolen what was set apart for destruction will himself be burned with fire, along with everything he has, for he has broken the covenant of the LORD and has done a horrible thing in Israel.   Joshua 7:15 NLT

At the LORD’s command, a man of God from Judah went to Bethel, and he arrived there just as Jeroboam was approaching the altar to offer a sacrifice.  Then at the LORD’s command, he shouted, “O altar, altar!  This is what the LORD says: A child named Josiah will be born into the dynasty of David.  On you he will sacrifice the priests from the pagan shrines who come here to burn incense, and human bones will be burned on you.”   1 Kings 13:1-2 NLT

He [Josiah] executed the priests of the pagan shrines on their own altars, and he burned human bones on the altars to desecrate them.  Finally, he returned to Jerusalem.  King Josiah then issued this order to all the people: “You must celebrate the Passover to the LORD your God, as it is written in the Book of the Covenant.”  There had not been a Passover celebration like that since the time when the judges ruled in Israel, throughout all the years of the kings of Israel and Judah.  This Passover was celebrated to the LORD in Jerusalem during the eighteenth year of King Josiah’s reign.  Josiah also exterminated the mediums and psychics, the household gods, and every other kind of idol worship, both in Jerusalem and throughout the land of Judah.  He did this in obedience to all the laws written in the scroll that Hilkiah the priest had found in the LORD’s Temple.  Never before had there been a king like Josiah, who turned to the LORD with all his heart and soul and strength, obeying all the laws of Moses.  And there has never been a king like him since.   2 Kings 23:20-25 NLT

Chastised a little, they shall be greatly blessed, because God tried them and found them worthy of himself.  As gold in the furnace, he proved them, and as sacrificial offerings he took them to himself.  In the time of their visitation they shall shine, and shall dart about as sparks through stubble;   Wisdom 3:5-7

The Book of The Wisdom of Solomon is mostly in Catholic versions of the Bible.

And this became a hidden trap for mankind, because men, in bondage to misfortune or to royal authority, bestowed on objects of stone or wood the name that ought not to be shared.  Afterward it was not enough for them to err about the knowledge of God, but they live in great strife due to ignorance, and they call such great evils peace.  For whether they kill children in their initiations, or celebrate secret mysteries, or hold frenzied revels with strange customs…   Wisdom 14:21-23

This passage condemns human sacrifice but acknowledges that it did happen by early God worshipers.

Humans are Fuel for Fire

As for you, son of man, prophesy: Thus says the Lord GOD against the Ammonites and their insults: A sword, a sword is drawn for slaughter, burnished to consume and to flash lightning, because you planned with false visions and lying divinations to lay it on the necks of depraved and wicked men whose day has come when their crimes are at an end.  Return it to its sheath!  In the place where you were created, in the land of your origin, I will judge you.  I will pour out my indignation upon you, breathing my fiery wrath upon you, I will hand you over to ravaging men, artisans of destruction.  You shall be fuel for the fire, your blood shall flow throughout the land.  You shall not be remembered, for I, the LORD, have spoken.   Ezekiel 21:33-37

Suppose you hear in one of the towns the LORD your God is giving you that some worthless rabble among you have led their fellow citizens astray by encouraging them to worship foreign gods.  In such cases, you must examine the facts carefully.  If you find it is true and can prove that such a detestable act has occurred among you, you must attack that town and completely destroy all its inhabitants, as well as all the livestock.  Then you must pile all the plunder in the middle of the street and burn it.  Put the entire town to the torch as a burnt offering to the LORD your God.  That town must remain a ruin forever; it may never be rebuilt.  Keep none of the plunder that has been set apart for destruction.  Then the LORD will turn from his fierce anger and be merciful to you.  He will have compassion on you and make you a great nation, just as he solemnly promised your ancestors.  “The LORD your God will be merciful only if you obey him and keep all the commands I am giving you today, doing what is pleasing to him.   Deuteronomy 13:13-19