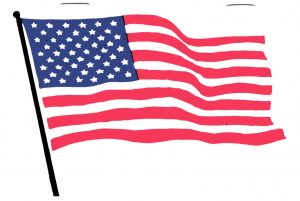 I found myself at Whole Foods just ahead of the 4th of July and happened upon a small pamphlet on the ground containing cover to cover religious crazy.

Most religious tracts and pamphlets are typically between four to ten pages in length.  This sucker weighs in at an unholy thirty-one pages of cherry picked Bible verses and carefully crafted religious fear mongering.

The pamphlet comes from a Christian outreach organization called The Gospel Hour, founded by Baptist evangelist Oliver B. Green.

Here are the first few pages and a few random thoughts on the pamphlet material. 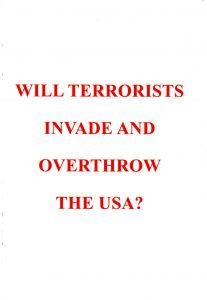 Overthrow of the United States.  Check.

Good old fashioned Christian fear mongering to get you started. 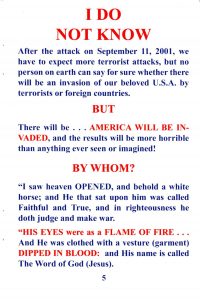 I DO NOT KNOW

The author throws throws terrorism and invasion at you and then immediately says “I do not know”?  Nice.

… no person on earth can say for sure whether there will be an invasion of our beloved USA by terrorists or foreign countries.

In the real world there are many many people and organizations dedicated to counterterrorism and the defense of this country.

Invoking the specter of 9/11 and the notion of “nobody knows” is a ridiculous and typical setup for what happens next.

Jesus Invasion USA™ is coming for you and 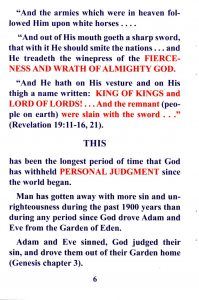 the son of God is the blood soaked garment wearing terrorist that will bring fierceness and wrath to the people of the earth.

Now begins the great harvest of cherry-picked bible verses, starting on this page with Revelations 19 and then jumping all the way back to Genesis 3 within two paragraphs.

Fundamentalist tracts are always crammed with cherry-picked bible verses from beginning to end and always skip the inconvenient or contradictory verses.

This has been the longest period of time that God has withheld PERSONAL JUDGEMENT since the world began.

Would this be the sin and unrighteousness that people have committed and cited the Bible itself as justification for those horrors?  Slavery, Rape, Murder, Genocide, the Crusades, the Inquisition, etc? 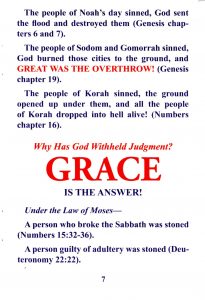 The people of Noah’s day sinned, God sent the flood and destroyed them (Genesis 6-7)

For God so loved the world… He committed mass genocide and murdered everyone because they were not behaving the way he wanted.

God orders 600 year old man and his family (future sanctioned incest) to build a boat to save every species of animal, bird, and insects on the planet from the carnage he is about to cause.

The people of Sodom and Gomorrah sinned, God burned those cities to the ground…

When fundamentalists gleefully reference Sodom and Gomorrah, they only focus on homosexuality as the justification for their loving God to murder the population of entire cities.  There are other sinful elements to the mythical story of Sodom and Gomorrah across the entire Bible.

The other disturbing parts of the story that are ignored: Lot (the “just and righteous” as described in 2 Peter 2:7-8) offers up his two virgin daughters to be gang raped by a mob of men [Genesis 19:9].  Later in the story, Lot’s daughters get their father drunk and rape him to have incestious offspring.  [Genesis 19:32-36] 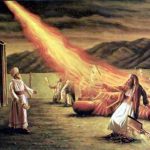 The story of Korah is another terrible example of God’s “love” for his creation.  What happened exactly? 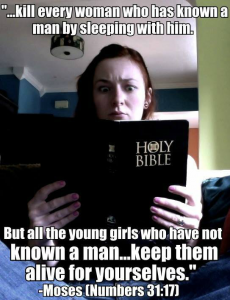 Maybe Korah and his companions called Moses out on plagiarizing the 42 Commandments of Ancient Egypt?

This little murder detour for God and Moses is no divine moral high ground.

Moses later escalates the crimes against humanity on the Midianites by ordering his commanders (who were being too merciful) to kill all the men, boys, and non-virgin women… while keeping the all the virgin girls for later raping by his soldiers, all with God’s approval.  [Numbers 31:7-18]

Fundamentalists use the Rebellion of Korah story as a grim warning of what happens to those who have the gall to think for themselves, to choose their own path in life, and to not blindly obey their murderous deity.

The Christian notion that the atrocities committed in the story of Korah are somehow admirable is just flat out repulsive.

Why Has God Withheld Judgement?  GRACE IS THE ANSWER! 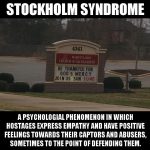 Translation = You must be thankful you were not murdered and tortured for all eternity by a sadistic serial killer… but you still might be, unless you unquestioningly love him.

This is the Stockholm Syndrome cornerstone of Christianity, love your abuser.  Check the article link below.

Christianity: A Relationship Built on Threats 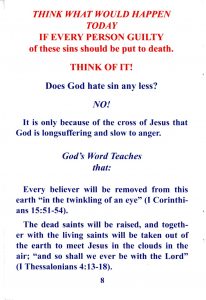 Under the Law of Moses —

A person who broke the Sabbath was stoned.

A person guilty of adultery was stoned.

THINK WHAT WOULD HAPPEN TODAY IF EVERY PERSON GUILTY of these things should be put to death.

Yes, completely horrific and barbaric… and exactly what you would expect from bronze age myths.

It is only because of the cross of Jesus that God is longsuffering and slow to anger.

God is slow to anger?  Not so much.

The tract then launches into all the horrible things that will happen during the end times and that the only way to save yourself is to love the entity that is causing all the destruction in the first place.

A Wrath of Angels

Your Abuser Loves You

Smite All The Things

The next four pages try to convince you “when” the apocalypse is going to happen.

Ready for His Coming?

Skeptics Annotated Bible: The End of the World

The next four pages go on to explain that salvation is only attained by accepting the gift from Jesus…. or else!  Being a good person does not matter.  Living a life of compassion for others does not matter.  You will burn unless you give yourself and any critical thinking capabilities over to your abuser.

Christ All Up In You

The next set of pages go on to explain why you are worthless, why you cannot escape, and finally how to admit to being a filthy sinner and beg for salvation.

You salvation will require a few postage stamps along the way.

Is It Over Yet?

Fear is the Mind Killer

I find these tracts to be quite fascinating because of the mind numbing lengths the authors go to scare their unquestioning audience.  Believers that distribute these tracts are typically very ill prepared to have any sort of one-on-one discussion, so they basically resort to littering public spaces with their religious garbage.

Even though I found this religious pamphlet in Georgia, I was pleasantly surprised and encouraged to see exactly where all the other copies of The Gospel Hour’s crazy religious garbage ended up at the Whole Foods Market.  😀

The God Who Wasn't There