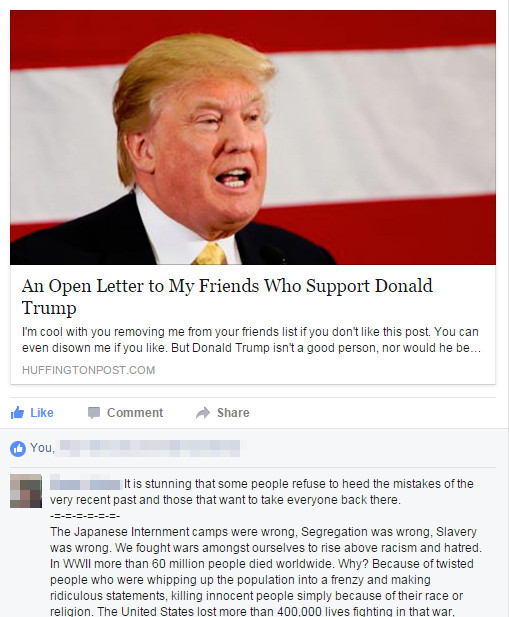 A good friend of mine shared a great article titled: An Open Letter to My Friends Who Support Donald Trump.

I decided to add my own 2¢ comment in (what I considered) reasonable support of the author’s sentiments.

It is stunning that some people refuse to heed the mistakes of the very recent past and those that want to take everyone back there.

The Japanese Internment camps were wrong.  Segregation was wrong.  Slavery was wrong.  We fought wars amongst ourselves to rise above racism and hatred.  In WWII more than 60 million people died worldwide.  Why?  Because of twisted people who were whipping up the population into a frenzy and making ridiculous statements, killing innocent people simply because of their race or religion.  The United States lost more than 400,000 lives fighting in that war. 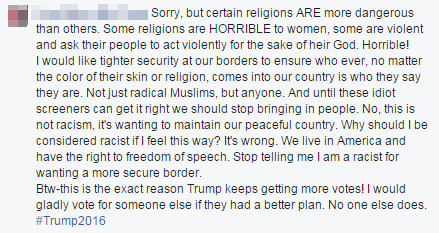 I try to avoid lengthy replies on other people’s timelines, however this random encounter appeared to be a decent exercise and my friend gave me the ‘green light’ to reply directly to the Trump supporter.  Yay!  😀

I know that nothing I type will have any effect on a person with the critical thinking ability of an A.M. talk radio parrot and the end result is one hundred percent what I expected.

Our wayward bigot starts off by railing against ‘certain religions ARE more dangerous than others’… but fails to identify exactly which religion, cult, or god(s) are on the receiving end of her scathing criticism at first.

Since the Trump supporter is so concerned about terrorism and wants a peaceful country, I will just assume that she is referring to that one dangerous Abrahamic middle-eastern religion and their violent extremists…

I completely agree with you! We need to do everything we can to keep these dangerous religious people out of this country. Have you seen their holy book? HORRIBLE to women! [ http://goo.gl/gNgjJm ] The murder, rape, slavery, and genocide for the sake of their God? Horrible! [ http://goo.gl/DRNIFd ]

Just last month a whole bunch of these armed religious terrorists took over a wildlife refuge in Oregon because their God told them to do it. They even used women and children as human shields! HORRIBLE! [ http://goo.gl/F0kJNW ] And last November when that terrorist murdered a police officer and two civilians in Colorado? [ https://goo.gl/jUW0CO ] Horrible!!

Based on the above and Trumps previous comments about registering all Muslims into a database and tracking their movements [ http://goo.gl/CxI00T ], try to imagine that absolute shitstorm that would instantly erupt if Trump or any politician announced plans to force all Christians to register into a national database to be tracked. Their careers would be over instantly and would most likely need to move out of the country within 24 hours.

Scapegoating a politically unpopular minority though… that’s perfectly acceptable to exploit that fear in their minds… and memories are short… because nothing horrible has happened after something like that was started, right? [ https://goo.gl/YZdwGu ] Oh.

Wanting secure borders is not racist, however when someone takes the extremist beliefs/actions of a tiny fraction of a group of 1.6 billion people, applies it to the whole, then singles out that particular group, and makes that the major selling point to their political campaign/ideology… that person is acting as a bigoted xenophobe and is extremely dangerous since we should have learned from recent history. The hateful rhetoric is already having serious consequences.

The screening process for Syrian refugees is extremely thorough.
http://www.cato.org/blog/syrian-refugees-dont-pose-serious-security-threat

I also want secure borders with legal immigration policies that are blind to race, color, religion, sexual orientation, etc…. However the dangerous road of hate by scapegoating Muslims that Trump and others promote has been paved before (Native American genocide, the Jews in WW2, Japanese American Internments in WW2, and on and on) and thankfully a lot of people recognize it for what it is.

When extremist groups like the Ku Klux Klan and others start publically announcing their enthusiastic support of such bigoted and dangerous candidates, it might be time to question your choice of candidate and party.  Anyone that seriously wants Trump in the White House should go back and watch Schindler’s List. Twice.

The well thought out counter response or refutation of a single statement? 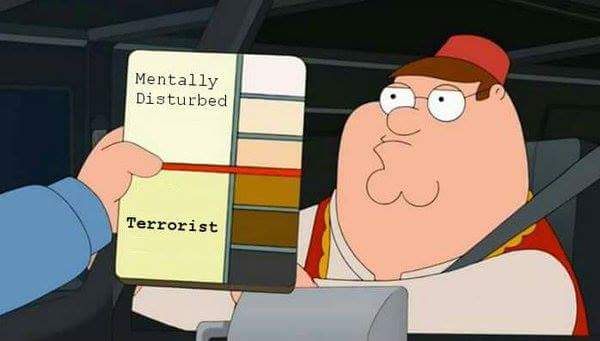 Reactions to DOMA and Prop 8