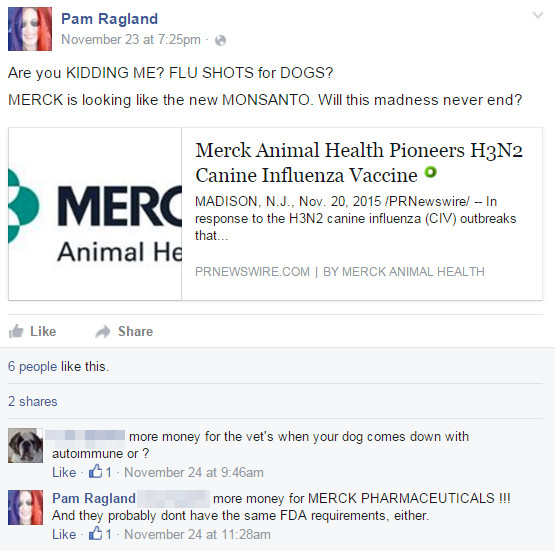 Pam Ragland is legitimately surprised that there is such a thing as vaccines for canines in another shady fearmongering post, railing against the “madness” that never ends.

The madness that Ragland rails against is Merck’s announcement of a Canine Influenza Vaccine, because anytime the word “vaccine” is used it is obviously evil and dangerous.

The PR Newswire link that Ragland shared goes to Merck’s announcement on a new vaccine to respond to the H3N2 canine influenza(wiki) outbreak.

In response to the H3N2 canine influenza (CIV) outbreaks that impacted dogs in 24 states, Merck Animal Health (known as MSD Animal Health outside the United States and Canada) today announced the U.S. Department of Agriculture (USDA) has issued a conditional product license for a vaccine to protect against this newly identified strain of CIV.

A few additional details from the release show what dogs and their owners could be facing.

According to clinical studies by researchers at the University of Wisconsin, the CIV H3N2 may be shed for an extended period of time – up to 24 days, which is far longer than what is seen with CIV H3N8. As a result, the infection can spread quickly among social dogs in inner cities, doggie daycares, boarding facilities, dog parks, sporting and show events and any location where dogs commingle. 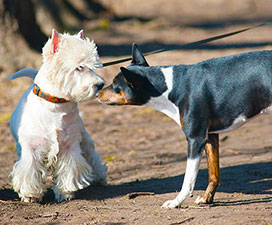 “Based on experimental studies in Asia and the rate of spread we’ve observed, I would estimate that H3N2 produces 10 times more virus than H3N8, which makes it far more contagious,” said Edward Dubovi, Ph.D., Professor of Virology and Director, Virology Laboratory, Animal Health Diagnostic Center, College of Veterinary Medicine, Cornell University. “Preventing the transmission of the disease through vaccination is highly recommended for those dogs that have lifestyles that put them at greater risk.”

Clinical signs of CIV H3N2 in dogs include coughing, fever, lethargy and interstitial pneumonia.  CIV can be spread by direct contact with respiratory discharge from infected dogs, through the air via a cough or sneeze and by contact with contaminated objects such as dog bowls and clothing or by people moving between infected and uninfected dogs.  According to the U.S. Centers for Disease Control (CDC), there is no evidence of transmission of the virus from dogs to people.

Pam Ragland obviously stopped reading the PR Newswire article as soon as she saw “Merck” mentioned and rushed the message to her anti-vaccination followers.

This is not the first time that Ragland has made some incredibly questionable and dangerous health advice for pets.

In June 2007, Ragland posted an article to her personal blog regarding a pet food recall.  Ragland’s original blog and post has vanished into the quantum void but the full post can be viewed here.  Below are the relevant portions of Ragland’s ridiculous claims: 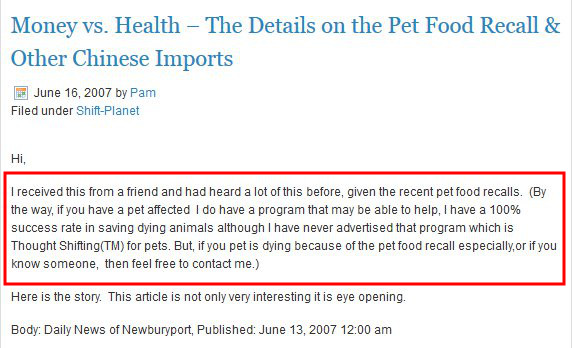 Ragland touts her Thought Shifting(TM) super-powers to heal pets suffering food poisoning and is very eager to sell her services.  She claims to have an impressive “100% success rate” as well.

How many medical journals has Pam Ragland been featured in that document her healing abilities?  Zero.

Does Ragland even do the responsible or sensible thing to tell her readers to immediately seek emergency veterinary care for their pets?  Of course not.

Pam Ragland’s claims are, as usual, completely self-serving, irresponsible fear mongering, and potentially dangerous if followed.  The paranoid anti-vaccination claim that “pharmaceutical companies are just making more money” is completely without merit, when compared to the health care costs critical infections incur on the unvaccinated, animal or human.  Canine Influenza and the more virulent H3N2 outbreaks are preventable.

The real unfathomable ‘madness’ is to imagine that anyone would risk the health of their pets, children, or themselves by taking health care advice from a failed psychic that has a long documented trail of unscientific woo nonsense.