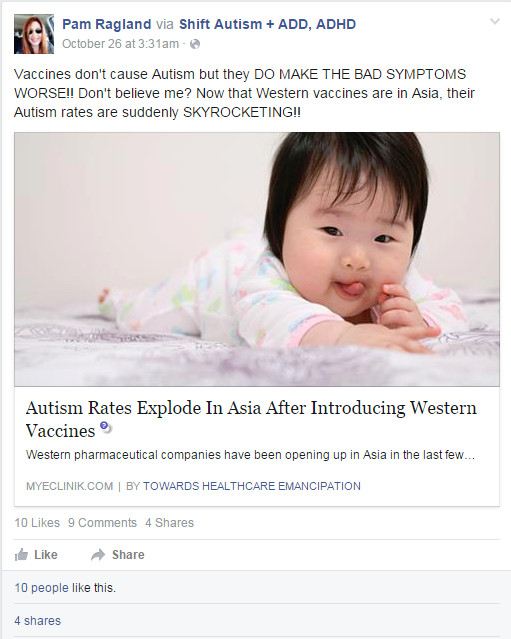 has returned to her old schtick of spreading false information and lies about vaccines and autism.

Before taking a closer look at the Autism article, I want to call a little attention to Pam Ragland’s opening remark:

Pam Ragland has repeatedly made the debunked claim that vaccines cause autism for several years, so the opening comment does not make much sense.  [Examples #1, #2, #3, #4, #5, #6]

As for Ragland’s “Autism rates are suddenly SKYROCKETING!!” declaration…   Take a look at the shared article.

The article was posted on July 4th 2015 at MyEClinik.com which is owned by one Edgar Enero.  The article, filed under ‘INCONVENIENT FACTS’, is nothing more than a lifted copy/paste from another post from one day earlier at YourNewsWire.com, another conspiracy/anti-vaccination site. [WOT Review].

The article opens with the following:

Western pharmaceutical companies have been opening up in Asia in the last few years introducing vaccination programs , and unsurprisingly autism rates have soared.

The author and those sharing the article have a clear intent to link the introduction of vaccines to Asia as the cause of soaring autism rates.

Since Pam Ragland, Edgar Enero, and other promoters of dangerous public health ignorance cannot be bothered to actually read the source material, here is the actual inconvenient fact…

The article sources do not contain any mention of vaccines.  Not even one!

Sounds serious, right?  How does the introduction of vaccines to Asia fit into the sourced article at Thanh Nein News?

Vaccines are not even mentioned a single time.

The shared MyEClinik article then continues with:

Korea is another country where autism rates have risen since the introduction of vaccination programs. Autism rates are as high as 1:38.

The author does not provide any source to this claim.

Then followed by a quote from Autismsupportnetwork.com:

This study is further evidence that autism transcends cultural, geographic, and ethnic boundaries and that autism is a major global public health concern, not limited to the Western world  [source]

Sounds serious again, right?  How does the introduction of vaccines to Asia fit into the sourced article at Autism Support Network?

Vaccines are not even mentioned a single time!

The article sources only detail an increased number of identified cases of autism.

There is no reference to an official study or even a vague passing attempt to link vaccines to autism (or worsening the symptoms as Ragland often claims) from any source cited in the article.

Western pharmaceutical companies have been opening up in Asia in the last few years introducing vaccination programs , and unsurprisingly autism rates have soared.

It is clear that the author’s attempt to link the introduction of vaccination programs and soaring autism rates is completely fabricated and outright false.

Pam Ragland and other anti-vaxxers will continue to blindly copy/paste/share the exact same material even though vaccines are not even part of the equation.

The article attempts to wrap all the paranoia together with five mind numbing YouTube videos from a parade of public health enemies.

The following videos are doctors who decided to do their own research on vaccinations and decided to speak out against them. 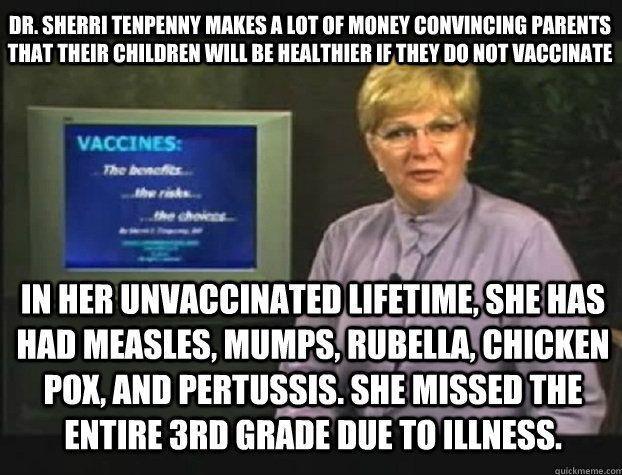 Edgar Enero ends the lifted article with completely unfounded medical nonsense to promote and sell his own ebook.  Surprise!

We can mitigate the effects of any chemicals and neutralized all types of parasites without using drugs or expensive procedures, but only with a very simple and complete protocol that defeats all known and unknown diseases for good, without any long-term side-effects. Find more about it here.  [emphasis added]

Here you can buy Enero’s 700 page ebook titled: Towards Healthcare Emancipation – For All diseases Including Cancer and AIDS…  for just $47.00 USD!

If you need any additional proof that the conspiracy/chemtrail/anti-vaccination woo people are simply attempting to make a quick buck, Enero allows his customers to buy multiple copies of his PDF ebook at checkout.

Vaccinate Yourself Against The Anti-Vaxxers