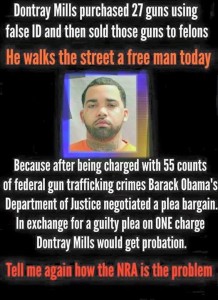 has been making the rounds since the school shooting in Oregon.  The assertion that Barack Obama’s Department of Justice took a special interest in this particular case and intervened to negotiate a plea bargain for Dontray Mills seemed a little off so I ran a few searches to find more details.  Almost all of the initial results were conservative, pro-gun, and nobama blog/twitter-vomit results that were just blind copy/paste rants from the original meme.

As it turns out, Snopes recently posted a detailed article on Dontray Mills and that Obama’s Department of Justice did NOT negotiate a plea bargain to get probation.

So how did Dontray Mills only get one year of probation? 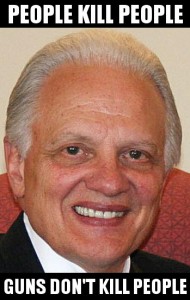 Rudolph Randa is a conservative federal court judge appointed by George H.W. Bush in 1992.  Randa has a history of controversial decisions: trying to keep Governor Scott Walker out of a criminal investigation and blocking access to women’s health clinics to name a few.  [source]

The incredibly light sentence was given by the sole discretion of Randa and not by some nefarious conspiracy deal by Barack Obama’s Department of Justice.

Rudolph Randa’s most reprehensible ruling of his career was when he protected the Catholic Archdiocese of Milwaukee.  Timothy Dolan intentionally transferred the money with the express intent of safeguarding Church funds from lawsuits by abuse victims.  Randa ruled that sexual abuse victims could not force the Church to dip into nearly $60 million that former archbishop, Timothy Dolan, had transferred into a separate cemetery fund.

Randa ruled that once the money had been placed into the trust, plaintiffs could not gain access to it, as it would “substantially burden the (Church’s) free exercise of religion.” 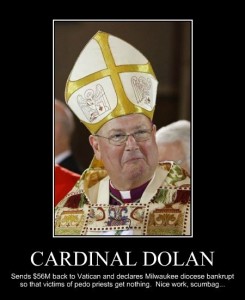 In March 2015, the 7th Circuit Court of Appeals reversed Randa’s decision and criticized Randa for not disclosing the fact his parents and other relatives are buried in a cemetery maintained by the Church’s trust fund.  Randa was asked to recuse himself from the original case in September 2013 but declined.  [source]

You might remember Timothy Dolan from when he fought to protect pedophile priests and wanted to keep the statute of limitations for child sex abuse victims down to “one year”, because if the church gets sued:

“The perpetrators don’t suffer. There’s no burden on them. What suffers are the services and the ministries of the apostolates that we’re doing now. Because where does the money come from? So the bishops of 30 years ago that allegedly may have reassigned abusers, they don’t suffer. They’re dead. So the people that suffer are those who are being served right now by the church. We feel that’s a terribly unjust burden.”  – Timothy Dolan [source]

The Dontray Mills meme actually makes a solid case for removing conservative pro-NRA mantra spouting federal judges that are insanely lenient on criminals and that also shield an organization that protects pedophile priests from their victims.

Here is what the meme would look like if it were actually honest: 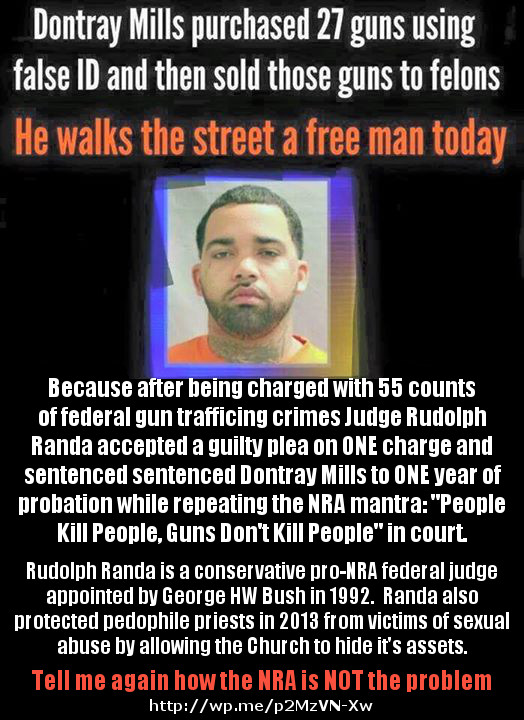