is expected to peak today as she and her staff are due in court to answer for Davis’ refusals to execute the lawful duties of her office.

Kim Davis cites the “authority of God” and claims to be an Apostolic Christian, where followers believe a highly literal interpretation of the Bible as “the inspired and infallible Word of God.”  Marriage is “sacred”, reserved exclusively for opposite sex couples, and should be in effect as long as the couple lives.  Kim Davis continues to cite her “God’s authority” when denying marriage licences to same-sex couples.

Additional information about Kim Davis’ past was verified in the last days, which spotlights the staggering (and typical) Christian hypocrisy, bigotry, and delusional self-persecution.

Since Kim Davis uses a literal interpretation of the Christian Bible as justification for her bigotry and inability to do her job, here is a breakdown of her past sins in relation to her Bible that she and other conservative Christians prefer that you ignore.

There were rumblings about multiple marriages early on and even Snopes posted an article as “Probably True” but it was yanked a week ago for unknown reasons.  This week multiple news sites pulled Davis’ marriage licences and posted them online for all to see.  Snopes updated their “Do As I Say, Not As I Do” article as “True“.

The sanctity of marriage was just so damn good Kim Davis had to have it FOUR times.  The marriage certificates can be viewed here.

I have yet to read a single article where Kim Davis holds a press conference in front of a government building, speaking out about denying hetero-sexual couples the ability to divorce.

Christian harlot Kim Davis had an affair and got pregnant by her THIRD husband while still married to her FIRST husband.  When the twins were born, her SECOND husband adopted them before she moved on to husband number FOUR.

Kim is really racking up the sins at this point, but what about a few of the lesser known (to Christians anyway) biblical sins? 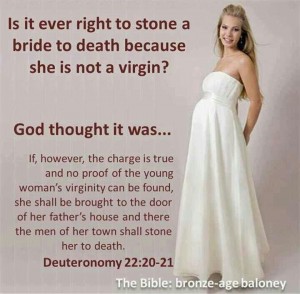 A marriage shall be considered valid only if the wife is a virgin.  If this wife is not a virgin, she shall be executed.  Deuteronomy 22:13-21

Ruh-roh!  So Kim violated the virgin marriage rule (at least) three times.  I will venture to guess that Christians and her supporters will just dismiss this Deuteronomy verse as outdated and irrelevant…. but “Goddamnit, the gays can’t get married!  It says so in Deuteronomy!  They’re the ones ruining the sanctity of marriage!“

What happened to “literal interpretation”?

Kim Davis gave birth to twins out of wedlock, through adultery no less.  What does her Bible have to say?  SURVEY SAYS!?!

Kim Davis has repeatedly defied the lawful authorities of the land, all the way up to the Superior Court.  What does her Bible have to say about that?

Every person is to be in subjection to the governing authorities. For there is no authority except from God, and those which exist are established by God.Therefore whoever resists authority has opposed the ordinance of God; and they who have opposed will receive condemnation upon themselves.  Romans 13:1-2

Kim apparently forgot her promise to the people that voted her into her position and to follow the law.

“I promise to each and every one that I will be the very best working clerk that I can be and will be a good steward of their tax dollars and follow the statutes of this office to the letter.”  Kim Davis, November 2014 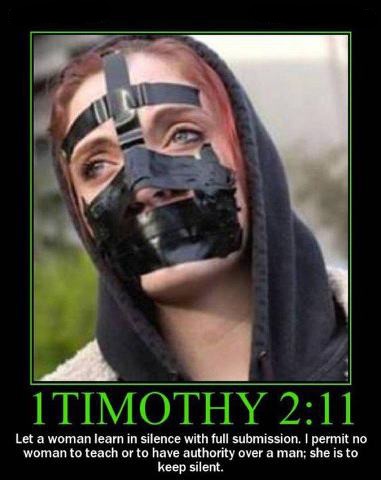 A woman must quietly receive instruction with entire submissiveness.  But I do not allow a woman to teach or exercise authority over a man, but to remain quiet.  1 Timothy 2:11-12

Unwilling to Love her Neighbors

Love your neighbor as yourself.  There is no other commandment greater than these.  Mark 12:31

“Do not judge so that you will not be judged. For in the way you judge, you will be judged; and by your standard of measure, it will be measured to you.”  Matthew 7:1-6

All of these passages are absurd and completely irrelevant today for any reasonable person, but as Dan Savage pointed out, Kim Davis and her supporters put the Bible front and center when she refused to do her job, she cannot just hypocritically dismiss her sinful past with a little magic Jesus Windex.

I’ve posted the following previously and it is still relevant to Kim Davis.

Christianity does NOT own or have exclusive rights to marriage.

The practice of marriage was around long before Christianity showed up.  Over 5,000 years ago, the Sumerians made laws which regulated marriage.  It was only until the 16th century, that the Catholic church passed the Tametsi Decree, which declared that no marriage was legitimate unless recognized by the church.

In other words, marriage only became religious in nature because the church declared themselves in charge of it.

Marriage is a human right, not a heterosexual Christian privilege.

Huffington post has an article on the practice of marriage through the ancient world.

Kim Davis is not a being persecuted or a righteous martyr.  She is the embodiment of Christian ignorance, hypocrisy, and bigotry.

In the end, Davis is simply being used as a pawn by Liberty Counsel and religious fanatics to keep themselves in the news, provide fodder for the GOP presidential theocrats, and attempt to do the ole Christian cash-in.

Unfortunately, when religious zealots are confronted by historical facts and passages from their own ancient myths that contradict their beliefs, they tend to do the only thing they can do…. embrace ignorance.