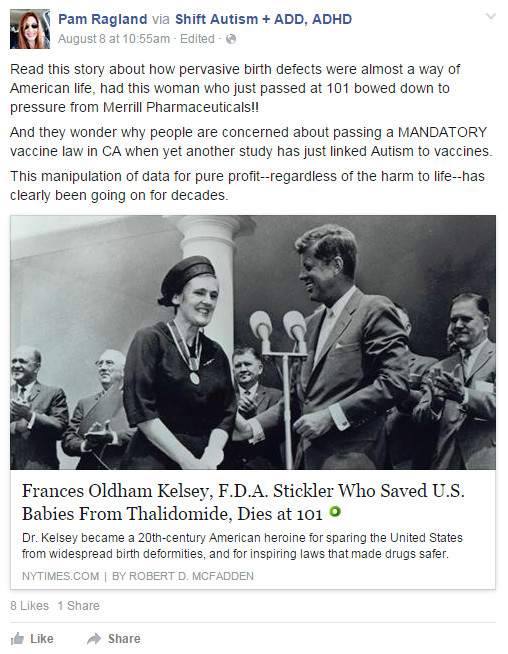 Self described quantum psychic and anti-vaxxer Pam Ragland never misses an opportunity to make distortions or outright ludicrous claims for shameless self-promotion.  The passing of Frances Oldham Kelsey on August 7th, 2015 will not be the exception.

Pam Ragland posted her  own quick thoughts on an article posted at the New York Times.

The article is very focused on the specific birth defects caused by thalidomide in thousands of babies in Europe, Britain, Canada, and the Middle East.  Despite pressure from Merrill, Dr. Kelsey persisted in requesting additional information and insisted on full testing prior to approval, which resulted in avoiding widespread birth deformities… AND being instrumental in the rise of modern laws regulating pharmaceuticals.

The only people that are concerned about SB277 (which already passed and signed by Governor Brown) are anti-vaxxers that have zero understanding of science, public health, or herd immunity. 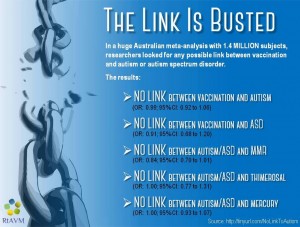 “… when yet another study has just linked Autism to vaccines.”

As with all of Pam Ragland’s “Vaccines Cause Autism!” proclamations, she provides zero source or link to a legitimate peer reviewed study that links autism to vaccines.

Any Google News search for the last month only shows shady conspiracy websites that  fall over themselves praising Andrew Wakefield, the author of the falsified and discredited Autism / MMR vaccine study.

Manipulation of data for pure profit?  Like Andrew Wakefield? 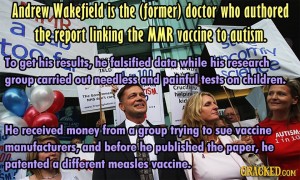 To be fair though… It is not as if Pam Ragland has a history of exploiting the memory of dead people.