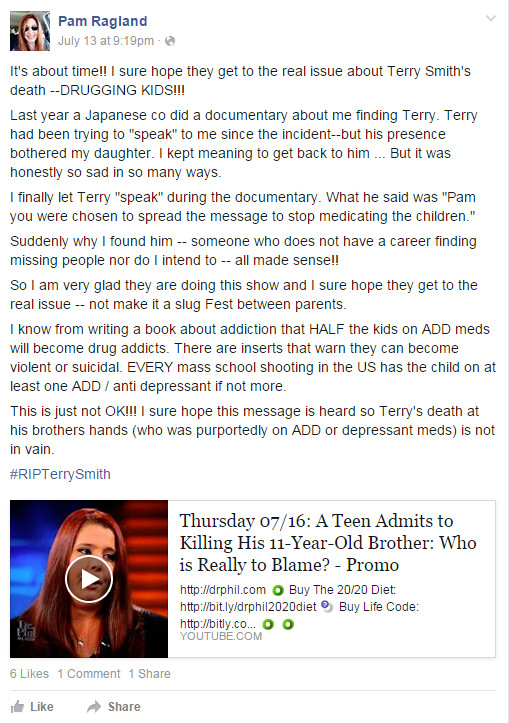 As the grim anniversary of Terry Smith Jr’s murder passes, Pam Ragland yet again takes the shameful opportunity to exploit the horrifying tragedy.

In the Facebook post, Ragland shares a link to a preview video of an upcoming episode of The Dr. Phil Show, which will feature Terry Smith’s family.

Similar to Ragland’s 2014 Facebook post, she continues to claim that she can speak directly to the deceased Terry Smith and that he told her she was “chosen to spread the message to stop medicating the children.”

Last year a Japanese co did a documentary about me finding Terry. Terry had been trying to “speak” to me since the incident–but his presence bothered my daughter. I kept meaning to get back to him … But it was honestly so sad in so many ways.

As of today, Pam Ragland’s “documentary” has never manifested itself and was most likely a small segment for a psychic detective show.

I finally let Terry “speak” during the documentary. What he said was “Pam you were chosen to spread the message to stop medicating the children.”

A few thoughts to keep us grounded in reality.

There is no substantial message from beyond from this or any of Pam Ragland’s previous “talks” with deceased Terry Smith Jr.

The real source of the “stop medicating the children” message is obvious in my opinion.

Suddenly why I found him — someone who does not have a career finding missing people nor do I intend to — all made sense!! 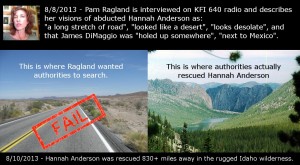 There is a very good reason why Pam Ragland does NOT have a career in finding missing persons.

She has a horrible track record when she repeatedly makes the attempt.

I know from writing a book about addiction that HALF the kids on ADD meds will become drug addicts.

This is a completely false according to DrugAbuse.gov: 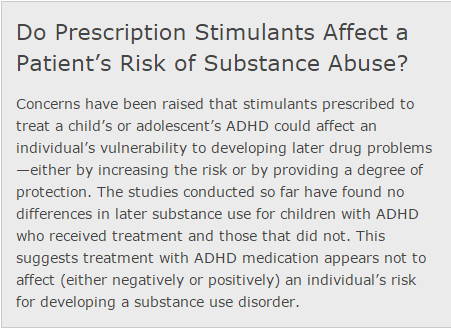 EVERY mass school shooting in the US has the child on at least one ADD / anti depressant if not more. 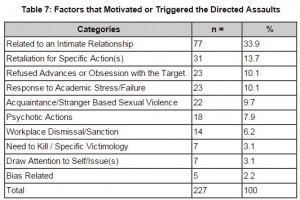 According to the Federal Bureau of Investigation’s report on campus attacks, there are many different factors that that have motivated or triggered shootings in the United States. [Campus Attacks, Qualitative Observations]

The episode was originally taped in August 2014 and according to Terry Smith Sr., the original air date was canceled as the producers were advised not to air the episode because of a pending wrongful death lawsuit.  Here is the episode that just aired on July 16th 2015.

Notice anything missing in the episode? 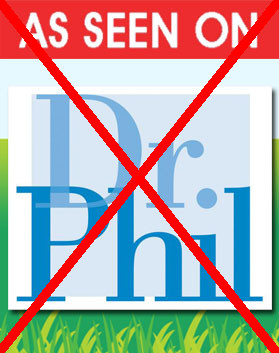 I guess Pam Ragland will not be able to add “as seen on Dr. Phil” to her websites now.  🙁

Exploiting the memory of Terry Smith Jr. for the purposes of promoting her anti-vaccination and medication fear mongering is reprehensible.  Ragland’s claims and statistics (when she provides them) are easily debunked.

Ragland’s assertion that she speaks to a brutally murdered child and that she was “chosen to spread the message to stop medicating the children” is monstrous and appalling. 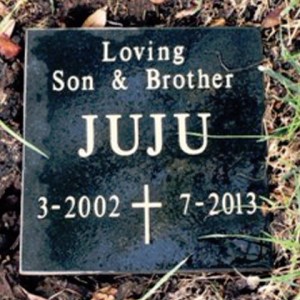 Pam Ragland and the Randi Challenge