It never takes very long for vile opportunists to take advantage of a tragic event for their own narcissistic attention and the death of Cecil the Lion is no different. 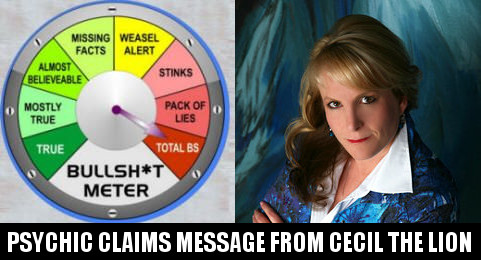 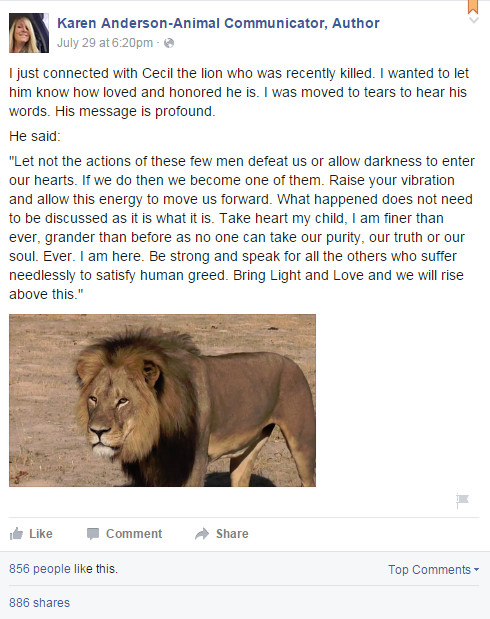 Soon after the news of the murder of Cecil the Lion at the hands of cowardly poacher (aka human garbage) Walter James Palmer, enter Karen Anderson, a self-described “animal communicator”.   Anderson posted to Facebook that she has spoken to Cecil the Lion from the afterlife and posted his message online for all to see.

“Let not the actions of these few men defeat us or allow darkness to enter our hearts. If we do then we become one of them. Raise your vibration and allow this energy to move us forward. What happened does not need to be discussed as it is what it is. Take heart my child, I am finer than ever, grander than before as no one can take our purity, our truth or our soul. Ever. I am here. Be strong and speak for all the others who suffer needlessly to satisfy human greed. Bring Light and Love and we will rise above this.”

A few initial thoughts on this message:

The other sad part of the Facebook post is that at the time of this writing, it has 1,031 likes and over 1,400 shares.

I hope the shares are being sent as warnings as an example of self-serving nonsense that is a disgusting attempt for Karen Anderson to profit from.  Many comments are critical and skeptical of the message and Karen’s intentions.

The Business of Karen Anderson

Karen Anderson owns Painted Rain Productions LLC in Elk, Washington for over eight years.  Karen runs AnimalCommunicating.com as an animal communicator and psychic medium since 2004.  She sells a wide array of fantastic services.

Sessions for communicating with living or deceased animals from $75 to over $175.

Sessions for communicating with deceased humans from $149 to $169. 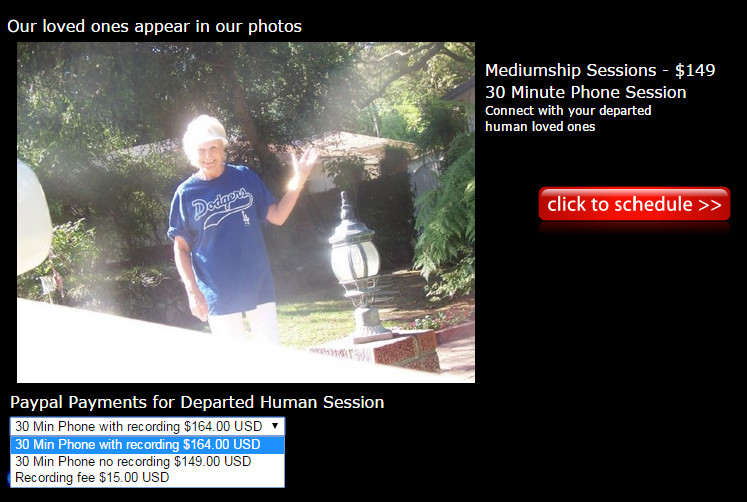 Our dear departed loved ones are reduced to smudges in photographs?  Riiiiiight.

A few of her other products and services include:

One of the most important elements on Karen Anderson’s website is somewhat easy to miss, since it is in the smallest possible font size.

Oh!  You having a little trouble reading that?  Allow me…<ahem>  ENHANCE!

There it is.  Everything about Painted Rain Productions, LLC that you need to know.

Karen has been thoroughly enjoying the attention and has been hard at work blocking users and sanitizing comments in the Facebook post.

Scrub Away the Skeptics!

I thought it would be a good idea to let Karen know that she could take claim the Randi Challenge $1 million dollar prize. 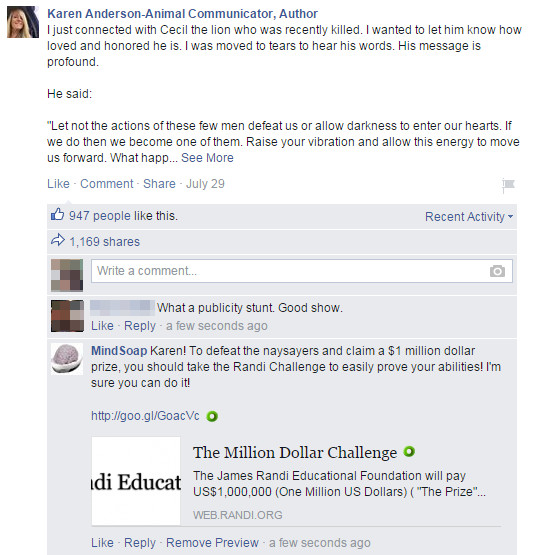 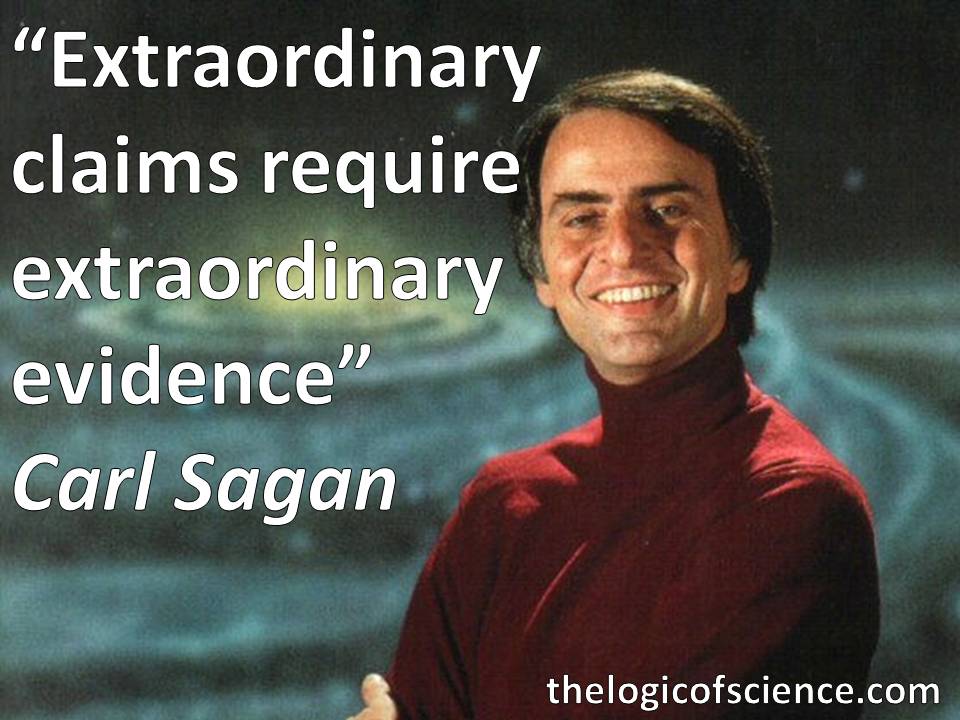 would not want a cool $1 million dollars prize and the international fame of proving your psychic abilities to the world?

People that claim to be psychics  overwhelmingly refuse to take the challenge because, as they describe it, “dumb and pointless“.

My polite inquiry comment was deleted by Karen about an hour later.

So is Karen Anderson unable or unwilling to prove her psychic claims?

Everyone, including her followers, should ask Karen to take the Randi Challenge.

Which option do you think Karen Anderson will take?

Dr. Oz Is Not The Victim

Ya’ll Need To Be Shooting That, We Getting Evaded!

The Plural of Anecdote Is Not Data