When Pam Ragland isn’t speaking to a dead child or embroiled in legal issues with banking institutions, she rallies the ignorant to her tiny banner of anti-vaccination beliefs.  Since the recent Measles outbreak peaked in California, lawmakers have had enough and are pushing ahead with legislation (California SB-277) to remove personal and religious beliefs as exemptions from children being vaccinated.

Pam Ragland again seeks to gain some form of attention to her cause and has launched her own petition to “Stop Trying to Force Vaccines“!

Since Ragland insists on looking at the FACTS, let’s do a little fact-checking to see how accurate she is.

The US Federal Govt. is trying to FORCE VACCINES ON CHILDREN yet the cost to society will far outweigh the risks!!!

As Ragland does not provide any reference to the actual federal law being proposed to vaccinate children, I found H.R.2232 – Vaccinate All Children Act of 2015.  The short version of the bill: “… the establishment of a State requirement for students in public elementary and secondary schools to be vaccinated in accordance with the recommendations of the Advisory Committee on Immunization Practices …”

The numbers of people (200) impacted or potentially impacted by Measles (the MMR vaccine) just doesn’t make sense given the risks to millions of children.

It’s difficult to discern what Ragland is actually trying to say here.  It seems as if she is saying Measles and the MMR vaccine are the same thing?  It doesn’t make sense.

If Pam Ragland was really interested in the impact of Measles, she should take a long look at the cases of Measles and other preventable diseases had on people before vaccinations were introduced.

1) There have been roughly 200 cases of Measles in the US – yet Autism is now 1 in every 48 boys, and ADD is now 1 in every 5 boys. While the girl rates are slightly lower, much of this is attributed to missing the more subtle symptoms in girls. (Many girls suffer in silence.)

Ragland again makes up numbers out of nowhere.

In January 2015 alone, there were over 119 documented cases of Measles. 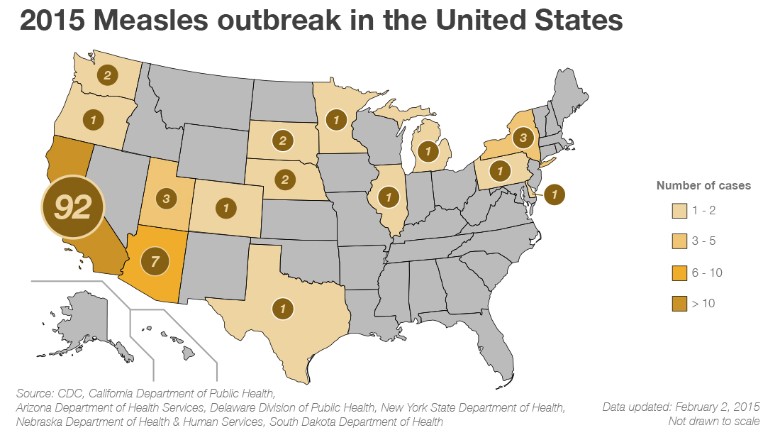 The second part of Ragland’s claim is where she really demonstrates the depths of her ignorance.

Measles is a treatable and preventable DISEASE, while Autism and ADD are NOT DISEASES!  Linking them all together is absolutely absurd, irrelevant, and intentionally misleading. 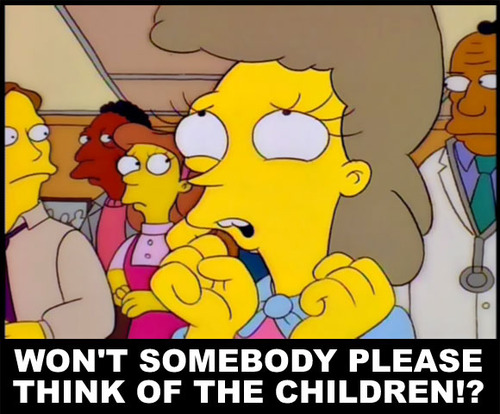 3) Right about now you may be saying “But wait – vaccines have not been linked to Autism.” WRONG. The ONLY study to link Autism to vaccines WAS WITH THE MMR!!! The Measles vaccine…

This claim right here should be the ‘uh-oh’ moment for anyone that encounters a Pam Ragland.

Andrew Wakefield’s study that linked Autism to the MMR vaccine has been proven to be a complete fabrication and has been called ‘the most damaging medical hoax of the last 100 years’. [source] 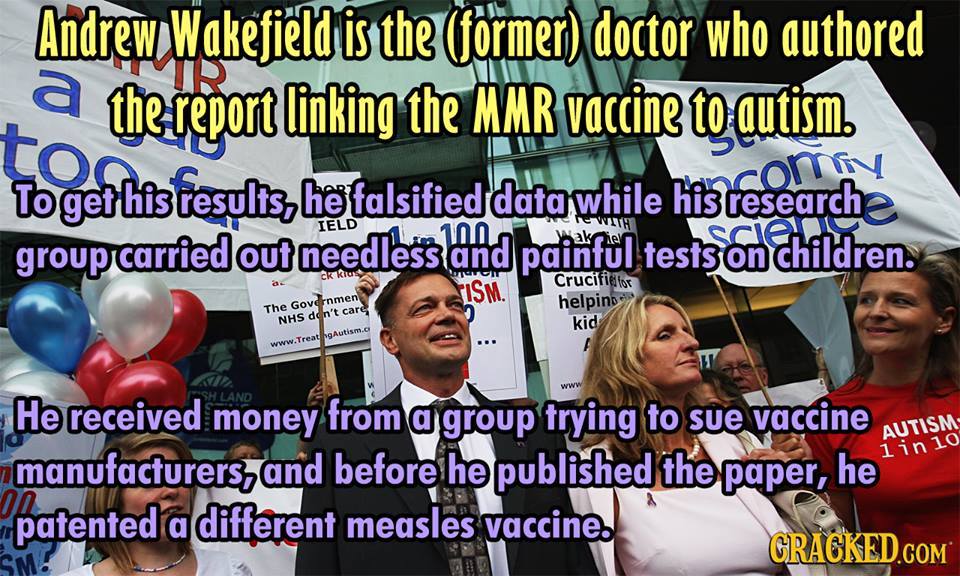 The End of the ‘Vaccines Cause Autism’ Myth

4) Some of you (not parents of these children) will say “But I heard that study was inconclusive?” Here is the thing – THE ONLY REASON THERE IS ANY DOUBT IS IT IS IMPOSSIBLE TO DO AN ACCURATE SCIENTIFIC STUDY OF VACCINES!!! 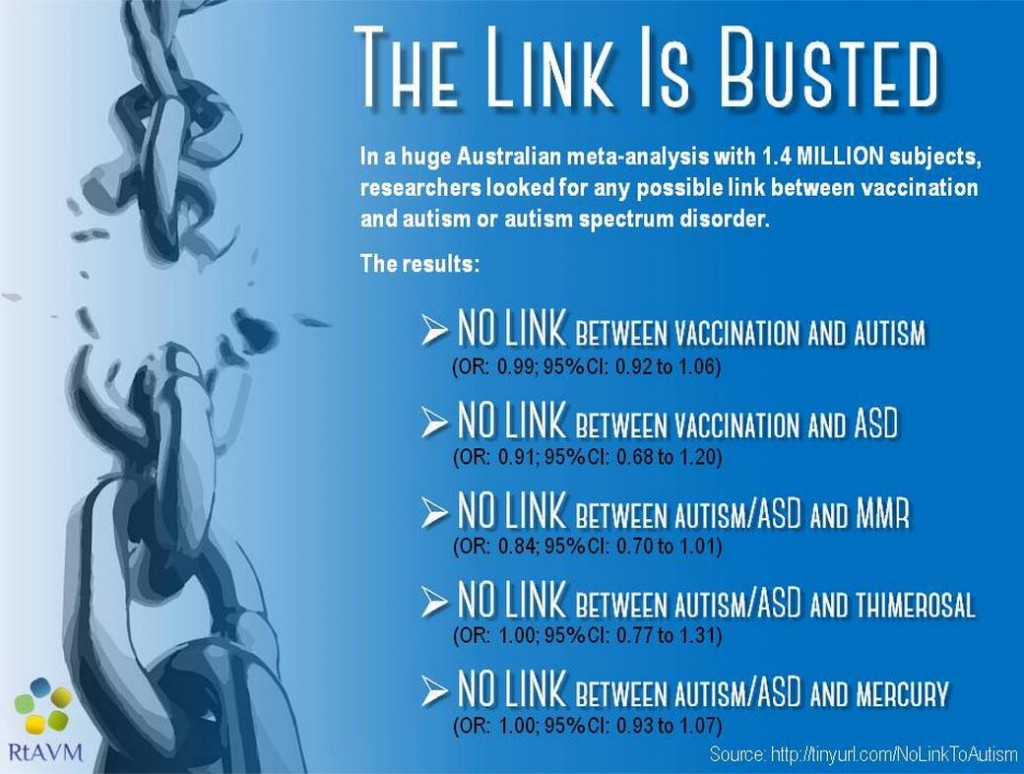 This is… of course.. a complete outright lie.

There have been many scientific studies of vaccines and possible links to autism.  A recent massive study of 95,000 children found no link between MMR vaccines and autism spectrum disorders.

Even children that had a family history of autism, researchers found no association between vaccines and autism.

Andrew Wakefield’s bogus Autism study was conducted on just 12 children… repeat that number a few times in your mind.

To absolutely prove that Wakefield lied, 25 million children have since been studied.

The results consistently demonstrate the rates of autism are the same in the vaccinated and non-vaccinated, proving NO LINK EXISTS.

-1-Children who are on the “spectrum” (ADD is also on the spectrum) do not detox at the same pace as the rest of us.Excess Metals can be found in their hair samples. The higher on the “spectrum” a child is, the worse this is.

Ragland and other anti-vaxxers love to throw around scary terms like “detox”, “excess metals”, and “toxins”, all of which are classic pseudoscience garbage.

-2-Vaccines do not CAUSE Autism or ADD – but they can make it WORSE. Because of the excess chemicals, vaccines can be the thing that, combined with other chemicals and metals (both with food, and environmental) throw the child into overload. Their little body cannot detox fast enough.

Whoa whoa whoa!  Put the brakes on the Quantum BS for a moment.  Pam Ragland literally said the exact opposite just a few moments ago.  (Item #3 above)

Ragland then repeats the false claim again further down in the petition.

Anecdotes Are Not Evidence

-6-This leavesus with only anecdotal reports from parents to determine the impact of vaccines. The RESULT ARE OVERWHELMING that parent after parent describes issues from mild to severe — including no longer speaking or communicating — due to the toxic overload the vaccines caused.

While anecdotal reports from parents can be helpful, at the end of the day anecdotes are NOT DATA… and Ragland’s claimed (and missing) results are irrelevant without peer reviewed scientific evidence. 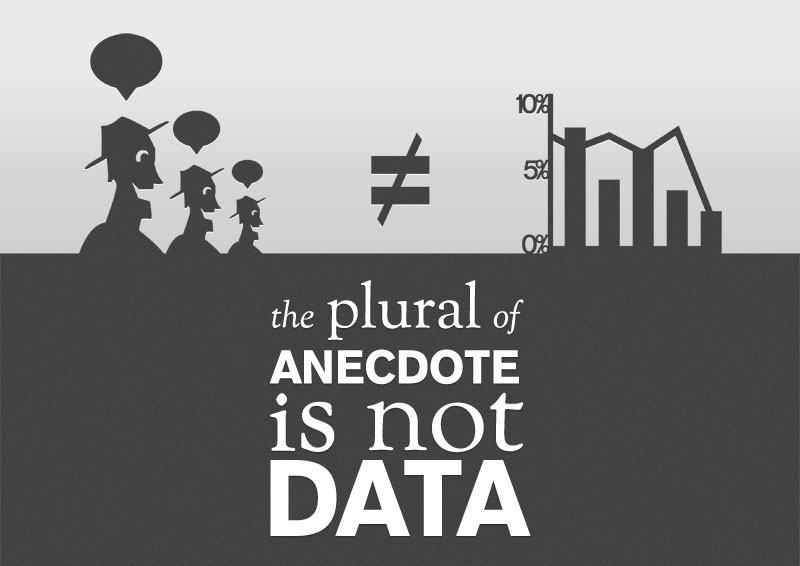 When Pam Ragland shrieks about the evils of toxic overload… consider the following:

This has a huge cost to society. When children are more severely impaired, they:

The cost?  Here are a few simple examples of the real cost to our society.

It doesn’t take a rocket scientist to see, this simply does not make sense.

Maybe not a rocket scientist, but The Annual Meeting of Pediatric Intensive Care Doctors Against Vaccines would like to say a few words: 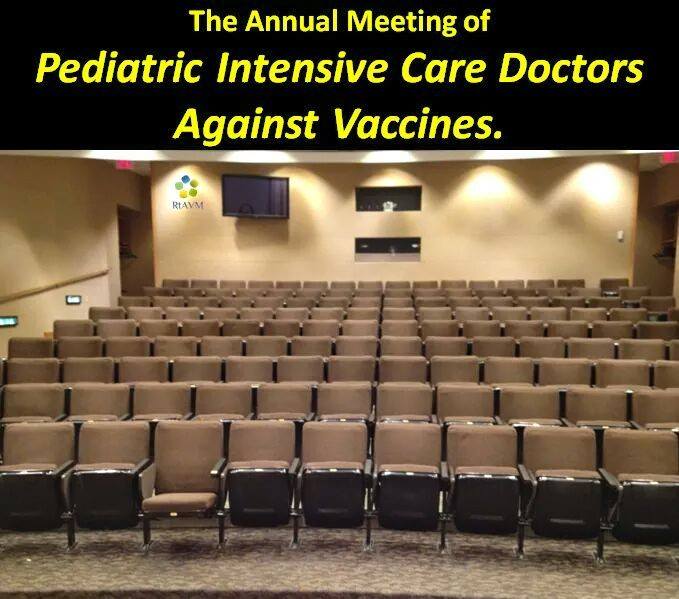 Further — did you know if you have an issue with vaccines in the US you can’t even sue in a normal court? You have to go to the VACCINE COURT!!! Even with all the foreclosures, we don’t have a special “Foreclosure Court”. WHAT ARE VACCINE MANUFACTURERS TRYING TO HIDE IN THEIR SPECIAL COURT????

According to Wikipedia: A Vaccine Court refers to the Office of Special Masters of the U.S. Court of Federal Claims, which administers a no-fault system for litigating vaccine injury claims.  Claims against vaccine manufacturers cannot normally be filed in state or federal civil courts, but instead must be heard in the Court of Claims, sitting without a jury. [Wikipedia]

Emil Karlsson at Debunking Denialism has a great summary on the history of the Vaccine Court and how it probably saved U.S. vaccine production.

The Vaccine Court was established because the irrational litigations of parents who falsely believed that their children had been damaged by the vaccine against diphtheria, tetanus and pertussis (DTP) vaccine. Juries awarded parents extremely large financial compensations despite the fact that either there was no evidence for a causal association or the evidence favored the rejection of such an association.

These false litigation claims nearly eliminated vaccine production in the U. S. all-together. This is because, contrary to the assertion of anti-vaccine cranks, pediatric vaccines are not really that profitable in comparison with other medical products. This is because such vaccines are only given a couple of times per individual per lifetime. Compare this with medication against high cholesterol etc. that people need to take every day. So many companies stopped producing the DTP vaccine and this threatened vaccine manufacturing in the U.S.

Another problem was that pharmaceutical companies could spend a lot of money on lawyers and drag out the legal proceedings to the detriment of families. This mean that families with children who had gotten actual vaccine side-effects had to wait a long time for the trials to finish and the entire process was presumably quite expensive for them, both in terms of time and money. Furthermore, some (but not all) legal claims required evidence of fault from the pharmaceutical company. This meant that the burden of evidence was fairly high.

The government understood these problems and established the Vaccine Court to handle it. In the Vaccine Court, the burden of evidence is much lower and does not require that the plaintiffs demonstrate fault. This means that it is a lot easier for parents to get financial compensation because they do not have to prove beyond all reasonable doubt that the pharmaceutical company did something wrong or demonstrate a massive amount of scientific evidence for a causal connection. It is also cheaper and faster for the plaintiffs as cases are handled much more rapidly and they do not risk having to pay the legal costs of the pharmaceutical companies if they lose.

In other words, Vaccine Court probably saved U. S. vaccine production and it is more beneficial for parents than the previous system were they could sue the pharmaceutical companies directly (U. S. Court of Federal Claims, 2004).  [source]

In the US, we have passed many laws ignorant of the consequences. Tell President Obama it’s time to PAY ATTENTION TO THE CONSEQUENCES.

Thankfully, President Obama has been vocal about vaccines after the growing measles outbreak.  On February 2nd, 2015, he urged parents to heed modern science and vaccinate their children.  “There is every reason to get vaccinated – there aren’t reasons to not,” he said during the interview.  “I want people to know the facts, the science, and the information.  The fact is that a major success of our civilization is our ability to prevent disease that in the past have devastated folks. And measles is preventable.  The science is pretty indisputable.” [source] 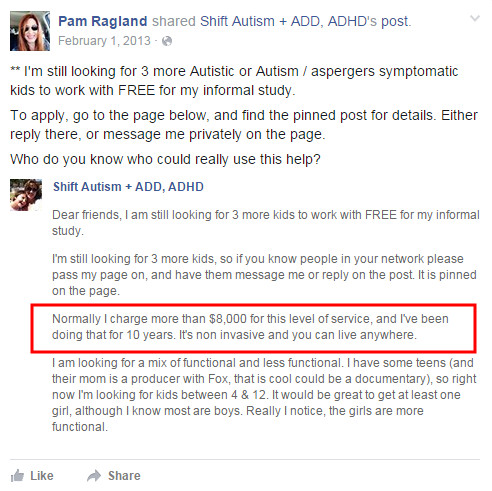 As a parent of an Autistic boy and an ADD girl, and who now works with these Spectrum children and adults (I have a healing gift Quantum Thought Shifting(TM) that accidentally helped my son…) I can tell you these consequences are very real. I have seen all these issues first hand many times. I am shocked the government anywhere would even consider forcing a vaccine KNOWN TO CAUSE AUTISM on millions of vulnerable children — just because of 200 cases of Measles.

Ragland again repeats the Wakefield lie that vaccines cause autism.

She also takes the opportunity to promote her Quantum Thought Shifting nonsense… although at the time of this writing… the website is “temporarily unavailable”.

Never fear dear reader… if you are concerned about “Big Pharma” in it for the money… anti-vaxxer Pam Ragland is different, right?

Interesting contrast when you look at the inventor of the Gardasil vaccine. 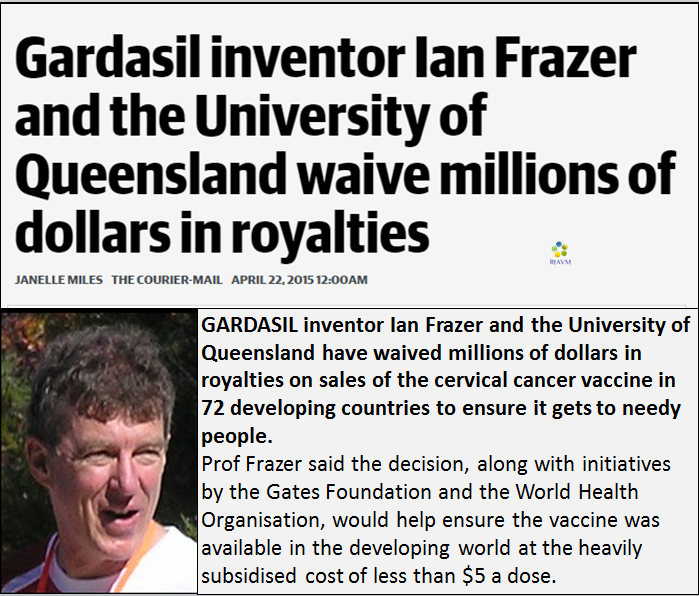 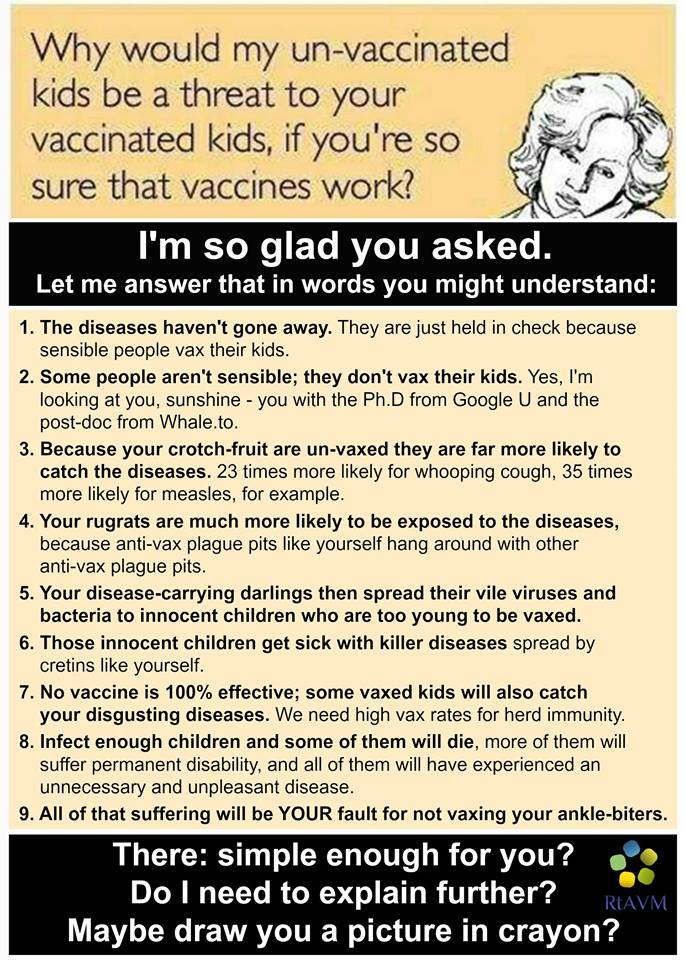 Please, tell President Obama it’s WRONG TO FORCE PARENTS TO VACCINATE THEIR CHILDREN JUST TO GET AN EDUCATION.

Otherwise, we could see a mass exodus from the traditional public school system by parents who know better and will not, at any costs, harm their child out of political ignorance. This will then cause increased costs for the remaining students, increased taxes for both education and long term care, heartbroken parents — and we stand to lose and entire generation out of ignorance!!!

YOU CAN MAKE A DIFFERENCE – SIGN THIS PETITION AND PASS IT ON!!!

At the time of this writing, Pam Ragland’s petition (starting around May 22nd, 2015), has garnered a total of 34 signatures.

At the current rate, Pam Ragland will reach the required initial milestone goal of 100,000 signatures sometime in October 2305.

The Murdering of Our Daughters (Reviewed)