Vatican’s Father Serra Rhetoric: He Was A Man Of His Time 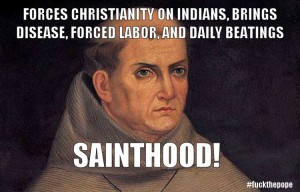 The Vatican continues to march ahead with the canonization of Junipero Serra, marginalize the brutal history of the man’s actions, and dismiss the sharp criticism from Native American Indians.

With impending sainthood on the horizon, the Vatican simply shrugs off any criticism of Father Serra as: “he was a man of his time.”

To accompany its acknowledgement of Serra’s use of “corporeal punishment” on the Indians of California as an “educational tool” of evangelism, the Vatican has said that Serra was “a man of his time.” What the Vatican has not acknowledged is notable: The context of the “time” that Serra was “a man of” was a context expressed in numerous papal edicts of the fifteenth century issued by popes who were men of their time. That context is found in the Holy See’s directive to Portuguese Catholic monarchs to “invade, capture, vanquish, and subdue, all Saracens, pagans, and other enemies of Christ,” “reduce their persons to perpetual slavery,” and “take away all their possessions and property.” (Dum diversas, 1452; Romanus Pontifex 1455).

It would seem that, in the Vatican’s view, someone who did a great job carrying out the papacy’s divine directive to achieve those ends by propagating the Christian empire through imperial evangelism deserves to be sainted.