is not very surprising at all.

Pam Ragland took a moment to defend good ole Doc Oz after he was called out by physicians that want him removed Columbia University faculty.

“Dr. Oz has repeatedly shown disdain for science and for evidence-based medicine,” said a letter the 10 physicians sent to a Columbia dean earlier this week. They say he’s pushing “miracle” weight-loss supplements with no scientific proof that they work. 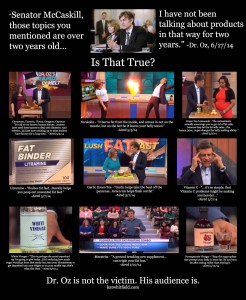 te that Oz, for years a world-class Columbia cardiothoracic surgeon, “has manifested an egregious lack of integrity by promoting quack treatments and cures in the interest of personal financial gain.” They said he has “misled and endangered” the public.

Last year, Oz appeared before a U.S. Senate panel that accused him of endorsing products that were medically unsound. At the time, Oz acknowledged that some of the products he advised his viewers to use “don’t have the scientific muster to present as fact.”

How does Dr. Oz respond to these claims?  Does he refute the core criticism?  Of course not. 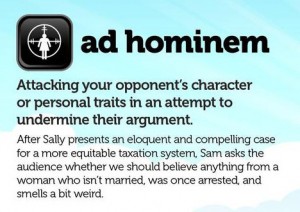 Oz does the only thing he can do and uses his television show as a pulpit to throw ad hominem attacks at critics.  In a Time magazine article, Oz goes three whole paragraphs before attacking the character/traits of his critics, without ever refuting the central point of the criticism.  Oz is also now claiming that his show “is not a medical show” but it is to discuss “the good life”… and that he would stop using the words like “miracle”.

From what I have read, Dr Oz was a great cardiothoracic surgeon at one time but then he decided to reinvented himself as a rock-star celebrity medical expert.  What Oz is doing is insanely unethical and a huge conflict of interest.  He is profiting from promoting items/claims to the public when the majority of them are not based in medical science, and he is fully aware that they are not. 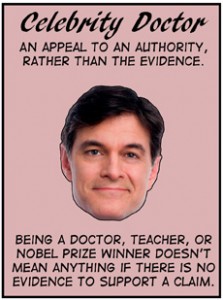 What other dubious medicine and claims has Oz been pushing:

As of April 24th, at least 1,000 US doctors polled also believe that Oz should resign from his faculty position at Columbia University due to his promotion of products and claims that are not supported by medical evidence.

So beware when self proclaimed psychics, quantum intuitives, or other peddlers snake oil woo come rushing to the defense of Dr. Oz when they continue to fail at understanding the importance of real world scientific evidence to support a claim.

Thought Shifting Review – 2. What Can It Do?