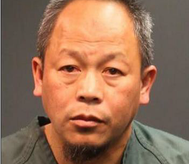 worked at the Indo Chinese Islamic Center in Santa Ana, California.  Prosecutors are accusing him of molesting three girls, ages 6, 7, and 9, who he met at the center.  Osman is charged with two felony counts of performing lewd acts upon a child under the age of 14 with a sentencing enhancement allegation for multiple victims.  Another parent has come forward to investigators alleging their 7 year old daughter was also molested.  Osman faces 50 years to life and mandatory sex offender registration if convicted.