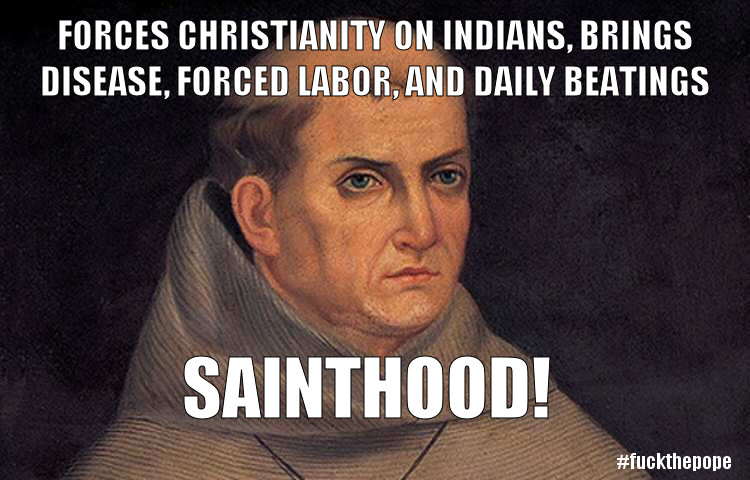 days after telling the world not to make fun of believers, terrorism apologist Pope Frances announces his intention to elevate Father Junipero Serra to sainthood.

Father Serra was the 18th century Spanish Franciscan priest that founded nine of twenty one missions in California, which cemented Catholicism in the state.  Pope John Paul II beatified Serra in 1988.

What the California missions also accomplished was the near eradication of several Indian tribes. Hundreds of thousands of indigenous people populated what is now California.  The mission system forced assimilation AND exposed thousands to foreign diseases, which wiped out whole villages.

Indians that were baptized could not leave the mission compound without permission, subjected to forced labor (more slavery!), corporal punishment, and lived very short lives.

The dark history of the California missions is always marginalized or outright dismissed by most Catholics.  The public schools in California deliberately water down the harsh treatment of Native Americans.  Noisy school field trips and building dioramas are pretty replacements to paint over the real history of the missions and the legacy of Father Junipero Serra.

More reading: A Cross of Thorns (to be released February 2015)

Vatican’s Father Serra Rhetoric: He Was A Man Of His Time