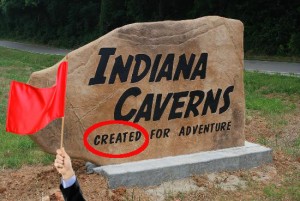 I have been visiting southern Indiana for over a decade and on this most recent family Thanksgiving trip, I noticed a new billboard while on the highway.  Indiana Caverns!  Complete with underground boat tour?  Sweet!  A few years back I really enjoyed the nearby Squire Boone Cavern tour, so I was excited to take my nephews out for an afternoon adventure.

I looked up Indiana Caverns to get details on the tour prices and directions.  Indiana Caverns recently opened to the public in 2013 outside Corydon, Indiana.  The caverns feature: diverse ecosystems, ice age bones, a walking tour with boat ride, amazing waterfall, and several different kinds of underground formations. 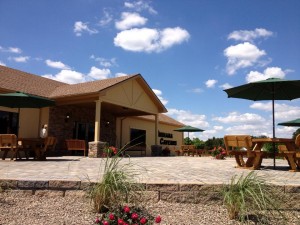 We were totally pumped!  My nephews were really excited to get out of the house for a while and explore another cave system.

What we found was not entirely what I was expecting but probably should have.

We arrived at the mostly empty parking lot in the early afternoon.  There were only two other sets of visitors aside from ourselves.  Awesome!  The staff was very friendly and I got our tickets.  The tour was beginning so we didn’t have any time to explore the main lobby. 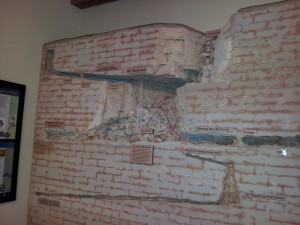 Our tour guide brought all of us down a flight of steps into the lower level where we entered a medium sized room with three rows of seats in front of a screen.  The tour guide explained that we would be watching a short video that explains the history of the caverns and it’s explorers.

Okey dokey.  I’m still pumped.  They even have one of my favorite wallpapers (geological time spiral) printed as a poster on the wall! 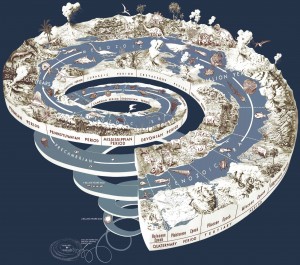 Boo-yah!  Let’s get us some science! 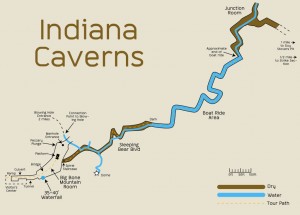 The tour video itself is a decent production put together where the narrator first explained the history of the Indiana Caverns.  Great!  Hurry up.  Get on with it!  I wanna see the caverns!

The narrator then makes a sudden sharp turn from geology/paleontology to astronomy and started to talk about Hubble’s deep space observations.

Wait a sec… how does this correlate to a cavern system in southern Indiana exactly?

Just hold on… the video is almost over by now…   be patient.

The narrator continues and then quickly says with something along the lines of:

“… and by these observations, we can see this universe was clearly designed for us …”

As quickly as the narrator had said it, the video was over and the lights were up.

The tour guide explained that we would now be entering the caverns through an environment room that keeps the exterior and interior cavern atmospheres separate. 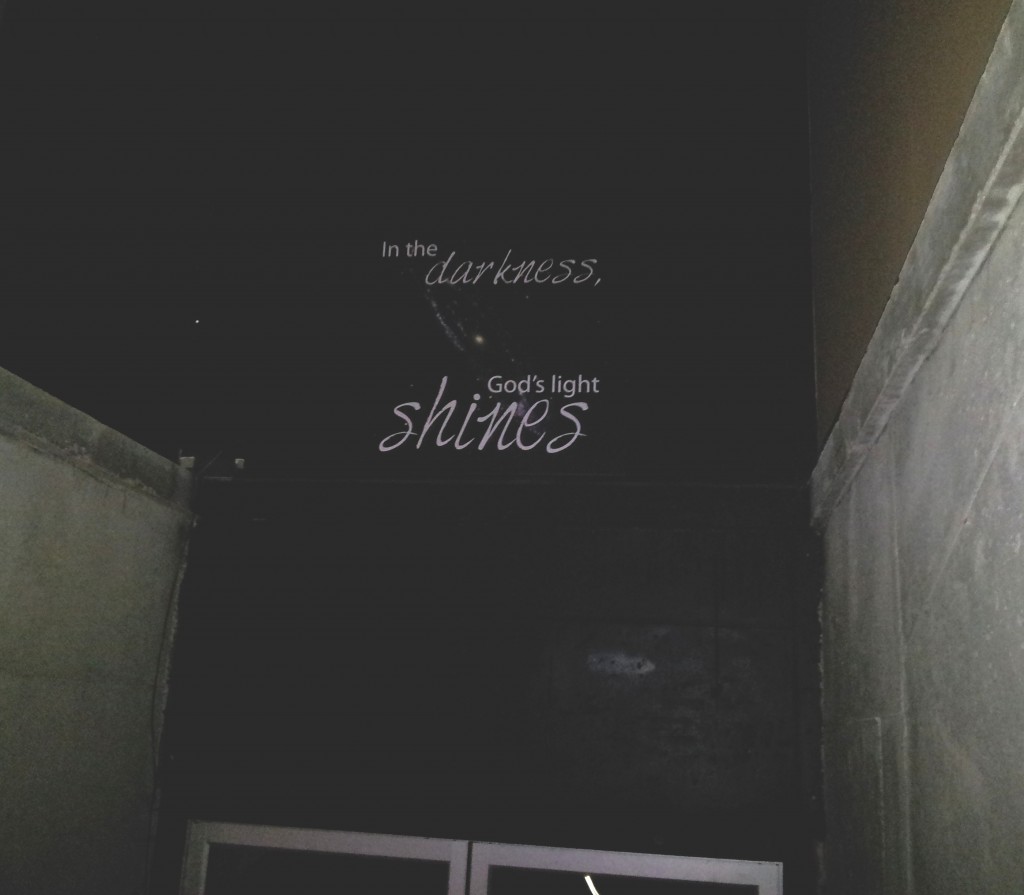 Ok, I understand the need for atmospheres to be.. something something….  but… ok, maybe I didn’t hear the narrator correctly.  Let’s keep moving.

We enter the next room and begin the downward path to the environment room when I notice the words above the door.

“In the darkness, God’s light Shines”

At this point I am a little more than irritated.  I did not buy tickets for myself and nephews to have this easily disproven creationist nonsense sneakily inserted into a tour that should be solely focused on history and science.

Thankfully, history and science is exactly what we got once we entered the caverns.  The tour guide was completely focused on actual science and history during the entire tour!

The caverns are an absolute treasure trove of Ice Age bones and living ecosystem.  Many bones of the flat-headed peccary and other animals can be seen on the tour.  There are several active dig sites where specialists from local universities and museums are excavating more discoveries.  Scratch marks are visible on the walls in several locations where animals attempted to escape the dark depths.  In several of the cave pools we saw salamanders and transparent blind crayfish.

The tour moved along into the darkness and eventually arrived at a boat dock platform.  After boarding the boat, we then moved along the quiet underground river for another fifteen minutes or so learning about the different cavern formations (keeping our heads low) and Ice Age bones that have been discovered.  Once we reach the end of the river segment, we then turned around and retraced our path through the caverns to the main entrance.

We then made our way back to the surface where we returned to the main lobby and the gift shop.  I was now able to take a complete look at what the owners had on display that I had missed when we passed through the lobby the first time.

There is also a YouTube video of the Gift Shop.  All the items detailed above are noticeably absent from this public commercial.  Only the nature books, minerals, colorful sweaters, and other non-religious items are shown. 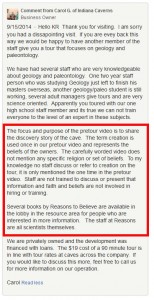 I have not been the only disappointed tourist at Indiana Caverns.  A recent Yelp review called them out on the creationist propaganda and one of the owners replied.

While Carol’s comment is certainly apologetic, her assertions about the pre-tour video are completely disingenuous in my opinion.

Carol explains that the video does not mention any specific religion or set of beliefs.

Very true.  The tour video does not mention any specific religion or beliefs.

However, the Gift Shop is loaded with more than enough Christian propaganda to choke a talking donkey.

To be completely fair, I did look around the entire Gift Shop.  A few items that I could not find:

Sadly none of the other three thousand gods or goddesses have any sort of equal representation at Indiana Caverns.

The cavern tour itself was fantastic.  It will probably take many decades to unearth all the Ice Age treasures hidden in the depths and hopefully more interconnected tunnels are discovered.  The tour guide was very knowledgeable and engaging.

Unfortunately the creationist religious propaganda soured the experience and I would not recommend funding this privately owned facility.  At least until the owners remove the creationist nonsense and focus solely on science, paleontology, and geology.

Local schools should definitely steer clear of Indiana Caverns as it is clearly influenced with a creationist message.  Subtly attempting to trick children into believing

Another visitor review from June 2015:

The Problem With Creationism 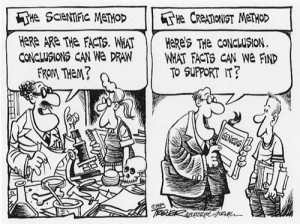 Creationism In A Nutshell

Creationists deliberately cherry-pick the nice and fluffy portions of the Bible to support their claims and at the same time plug their ears when anyone points out the massive number of contradictions, it’s un-divine origins, or the horrific atrocities committed by their god and his followers. 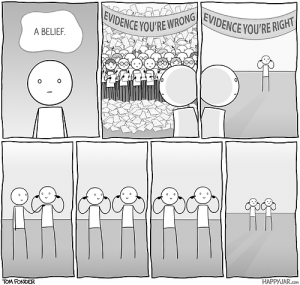 As they have honed this talent for ignorance, they have applied it to science as well… cherry-picking bits and pieces that only support their predetermined religious conclusion.

When other facts and scientific evidence flat out proves otherwise, well… let’s not let any of those other pesky facts interfere with a long standing belief.

A video of Tyson’s full presentation on science, religion and how poorly-designed humans, the Earth, and the universe really are can be viewed here.

Warning – Some of the medical images in the following video may be disturbing.

At the end of the recent Bill Nye and Ken Ham debate, the two were asked the following simple question: 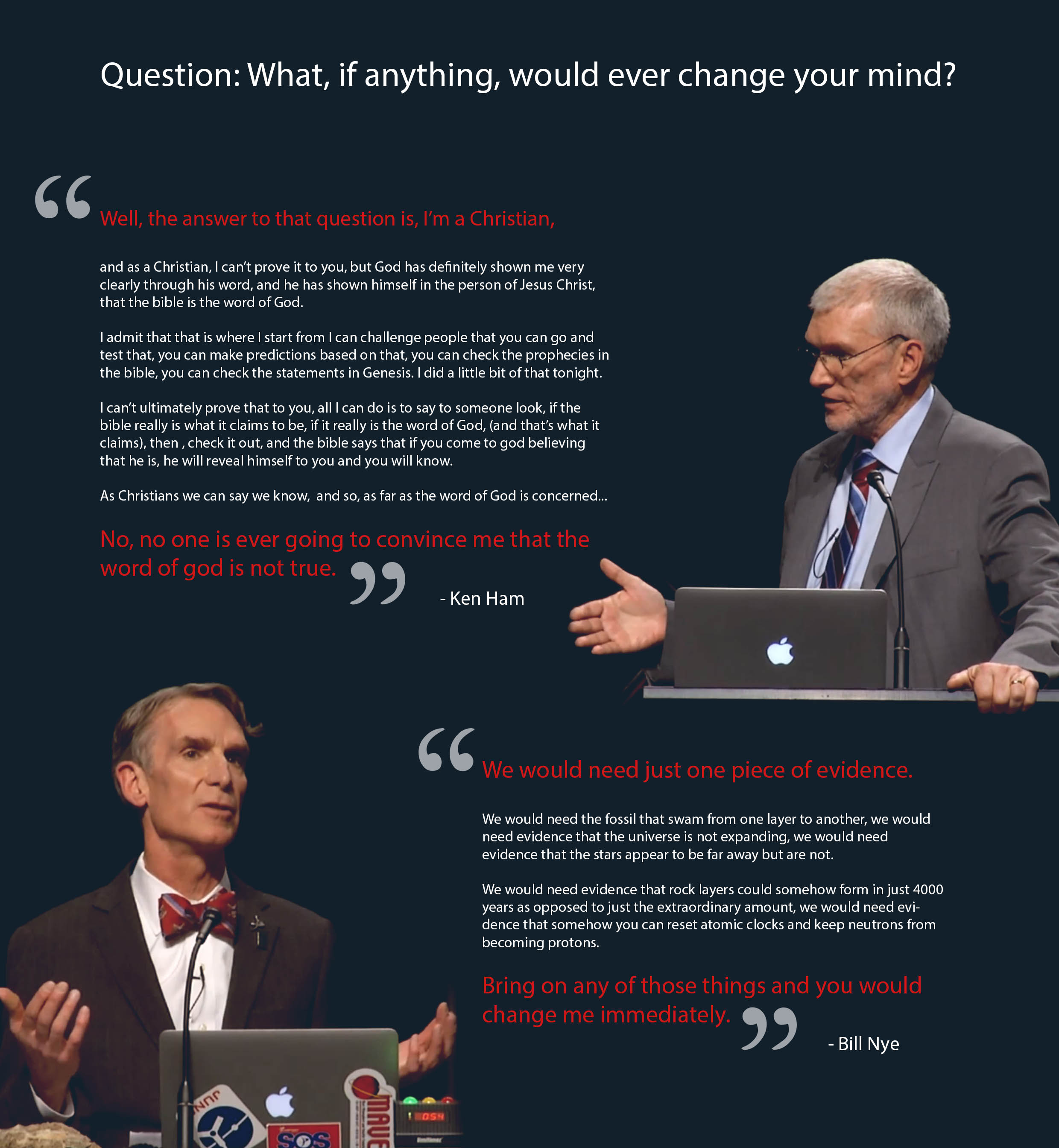