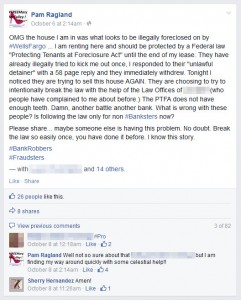 Pam Ragland’s desperate attempts for public attention and notoriety have thankfully diminished over time as she focuses on her legal troubles with US Bank.

A recent FB post details new woes and drama where she claims to be renting a house that may have been illegally foreclosed on by Wells Fargo Bank.

They have already illegally tried to kick me out once.  I responded to their “unlawful detainer” with a 58 page reply and they immediately withdrew.  Tonight I noticed they are trying to sell this house AGAIN.

Try to set aside the foreclosure and banking drama for a moment to correlate these claims with Ragland’s previous nonsense.

After so many years of legal battles with US Bank you would expect an all powerful self-proclaimed intuitive psychic such as Pam Ragland to be able to avoid such entanglements.