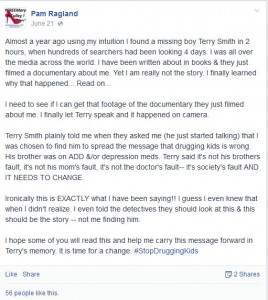 As the grim anniversary of the death of Terry Smith approaches, Pam Ragland takes yet another opportunity to shamelessly exploit his murder for her own narcissistic attention.

Almost a year ago using my intuition I found a missing boy Terry Smith in 2 hours, when hundreds of searchers had been looking 4 days.

After careful review of the events surrounding Ragland’s involvement with the Terry Smith search, the ever changing details of her story, her previous attempts to insert herself into the media, and her own constant self-promotion…  there really is little doubt that her claims are complete garbage and simply a disgusting tool to draw attention to her snake oil business endeavors.

I was all over the media across the world.

Yup.  Because she immediately found as many journalists as she could and then blasted news of her alleged exploits across Twitter and Facebook.  These are not the actions of a reluctant volunteer.  Remember, the search for Terry Smith was NOT the first time (or the most recent psychic vision bomb) Ragland attempted to jump in front of the media during a search for missing persons.  Here’s a hint, her “psychic abilities” didn’t find them either.

… they just filmed a documentary about me.

Ragland has been mentioning this documentary for a while now but I could not find any solid information about the production company behind it.  However, I did find an interesting piece over at Doubtful News about a similar film crew from Japan filming a segment for a psychic detective show.  [original article]  If this is the same production company, this is absolutely NOT a documentary.  This will be little more than the typical haunted house shows littering cable television.  Do not expect any level skeptical inquiry to the wild claims presented.  In the end, the production company gets a sensationalized psychic detective snippet, Pam Ragland will undoubtedly embellish her claims even further, and gullible viewers will most likely eat it up.  Disgusting.

Yet I am really not the story.  I finally learned why that happened…

And yet she continues to unearth a murdered child to draw attention to herself.

Terry Smith plainly told me when they asked me (he just started talking) that I was chosen to find him to spread the message that drugging kids is wrong.  His brother was on ADD &/or depression meds.  Terry said it’s not his brothers fault, it’s not his mom’s fault, it’s not the doctor’s fault — it’s society’s fault AND IT NEEDS TO CHANGE.

So here we come to the crux of Ragland’s delusions…  A murdered child speaks to her and tells her that:

Ironically this is EXACTLY what I have been saying!!

There is absolutely nothing ironic about this at all.  Because it is exactly what Ragland has been saying for ages on her blog.  Think about it.  Why would an 11-year old kid (living or dead) want to weigh in on the issue of western medical practices.  No real or substantive relevant information about Terry Smith, his family, or the events leading up to his murder are revealed here.  Call this for what it is… exploitation.

So according to Pam Ragland, since we can completely remove a talking dead child from the equation, “society” bashed this 11 year old’s skull in and half buried him under a tree in the yard…. and she is here to spread the message.

If Pam Ragland was as “spiritual” as she claims and had any shred of human decency whatsoever she would not be propping the corpse of Terry Smith up on her knee and pretending to be a psychic ventriloquist.

Ragland is not “chosen” and is not sharing a great message from beyond.

Keep in mind that Pam Ragland has had the opportunity to prove her abilities, under proper observing conditions, and win the Randi Challenge one-million dollar prize.  You would think that someone that claims to speak to the dead and summon the voice of a dead child (at a moment’s notice, in front of the cameras) could easily prove these claims.  You would also think that one million dollars would be a huge incentive for someone that actually has these abilities to step up and without any effort claim the cash prize.  The challenge rules and testing protocols are extremely reasonable.

I am certain Pam Ragland has a well thought out and reasonable explanation for why she refuses to claim the million dollar prize.

Vaccinate Yourself Against The Anti-Vaxxers