Hammer was later arrested, placed on administrative leave by the district, and was originally looking at a felony charge of taking property and a misdemeanor charge of assault with a deadly weapon.  [abc7.com article]  Unfortunately the felony charge was dismissed and the school district quietly allowed him to return to campus “in a support role working with other teachers,” according to a statement.  Parents are understandably furious and several have pulled their children from the school.  The Saddleback Valley Unified School District has now put Hammer back on leave.  Mr. Hammer has plead not guilty to the misdemeanor charge and will appear for a pre-trial hearing on Thursday, May 22nd.

So what was Hammer’s justification for his actions?

“When I stepped in, I felt compelled by a higher power,” Hammer said. “Honestly, have you ever been grabbed by the Lord in a way you never thought you would or you could? That’s exactly what I’m testifying to, and I’m not speaking in hyperbole. I’m speaking right from the heart.”

So Mr. Hammer takes it upon himself to waddle down the street and confront a bunch of children.  He pushes the first kid off the skateboard into the street.  This story could have a very different outcome if the kid had tripped and fallen in front of a SUV.  Hammer then swipes the skateboard and tries to shuffle away but is confronted for his sins by witnesses.

Mr. Hammer then assumes his final form as a Holy Warrior and raises the skateboard to strike a second skater.  He quickly changes his mind at the last moment when he realizes that everything he has done is being filmed.  So then he clumsily tries to toss the stolen skateboard over the hedge a few times before continuing his meltdown. 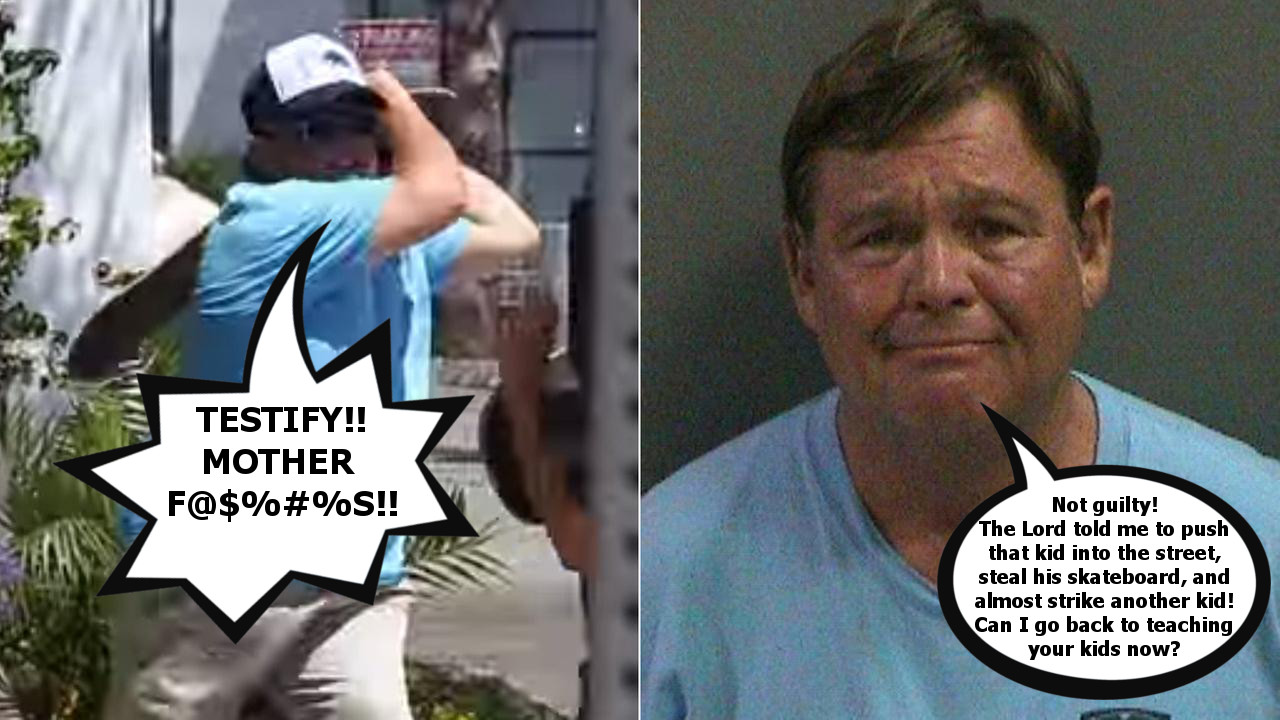 The court may want to consider ordering a psych evaluation for this guy if he is literally compelled by invisible forces to push a kid into the street, steal his skateboard, and when challenged holds the skateboard up to strike one of the other kids.

This is the kind of unstable person that is employed by Saddleback Valley as a 2nd grade teacher?