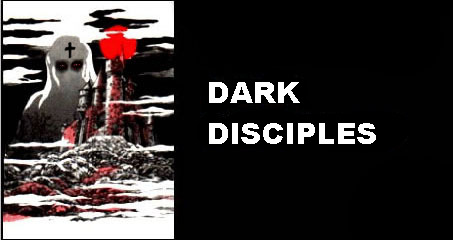 This is a parody/satire of the old religious propaganda comic called “Dark Dungeons“.

Instead of joining a witches coven, young misguided Debbie is cleverly indoctrinated into the cult of Christianity, with predictable results.

I was gifted a copy of the original comic in ’84 when the neighborhood parents lost their shit when all the kids started to play Dungeons and Dragons.  I remember one neighbor’s kids knocked on our door and said that he would no longer be playing D&D because it was evil and asked I wanted his stuff.  Umm, sure!  Score!  At the age of 14 that stuff is expensive!  An hour later I found several manuals and modules at our front door… all ripped to shreds, with the Dark Dungeons comic sitting on top.

Anti-D&D hysteria was the panic du jour at the time and the hyper-religious parents in the neighborhood made sure that their kids stayed far away from us after it was obvious I was not giving up the game.  I also remember calling up the phone number on the back of the comic.  A lady answered the phone and I asked her why they thought Dungeons and Dragons was evil.  The only answer I could really get from her was that magic was a mockery of Jesus Christ.  “Even when my magic-user casts fireball?  That’s bad too?”  <<click>>  Oh well.  Fuck em.

At least they didn’t burn all their D&D books in front of our house.

Jack Chick is an American Christian fundamentalist well known for Chick Publications, commonly called “Chick tracts.” His tracts cover various aspects of the Christian faith, including the principles of tolerance and love as well as the Catholics’ satanist conspiracy to overthrow God’s reign on earth. Or…something.  His claims about the Jesuits, for instance, include that they were responsible for the creation of the Qur’an, they tutored Karl Marx, started the Soviet Union and even got the Tsar’s gold as a reward.  Jesuits controlled the Gestapo and were responsible for the Holocaust, and somehow this is being deliberately withheld from the American people because of the seemingly infinite influence of the Catholic Church on the media.  As a general rule, his tracts read like the ramblings of a paranoid schizophrenic and make Pat Robertson look sane and mellowed out in comparison.

Dark Dungeons is also getting the indie movie treatment soon.

The Data – Scientists vs Creationists