Another terrible situation unfolded in Southern California this week and self-described psychic Pam Ragland is already positioning herself and her daughter to take advantage of as much media attention as she can get.

Amber Alerts were sent out Sunday evening for James Lee DiMaggio, suspected of abducting a 16-year-old Hannah Anderson and wanted in the death of the girl’s mother younger brother.  The alerts were quickly expanded to Oregon and Washington.  [full story] [wiki]

Steven Gregory at KFI AM640 radio called Ragland to talk about the case and was aired on Bill Handel’s morning program on Thursday, August 8th 2013.

The segment begins with a background on the Amber Alert search and the portion involving Pam Ragland begins at about 4:30.  Listen to the trimmed segment below:

Here are a few observations on Ragland’s interview predictions and claims:

Ragland’s daughter senses a female presence and becomes upset.  Ragland claims that her daughter can feel the presence of “spirits and things like that”.  Ragland herself “tunes” into the presence and identifies it as a girl (presumably Hannah Anderson) that is trying to “communicate something”.

Ragland claims to have a vision of “a long stretch of road”, that “looked like a desert”, “it was kinda flat”, and “looks desolate”.

Ragland called the police line to let them know that she believes DiMaggio is “definitely unstable and possibly suicidal”.  DiMaggio is also described as “holed up somewhere”.  “Next to Mexico.. all made sense.”  The police did not call her back.

When asked if the girl is alive or dead, Ragland gives a long pause before saying that she could not answer the question as she hasn’t been doing this enough to know how good she is at it.

The “feelings” that she is receiving “aren’t good” though.

Ragland explains that she receives information from both living and dead spirits.  She has difficulty in distinguishing between the two as the dead spirits often are not sure that they are gone.

The radio host, Bill Handel, makes a point to focus on Ragland evading the direct question about Hannah being alive or dead.  Steven Gregory repeats Ragland’s explanation that “she is not sure if she is good enough at that yet”.  The Terry Smith search was newer to her because she never applied those visions to cases or people that she doesn’t know about.  She deals with people who she has a one-on-one with.

Ragland claims to have regular conversations with (the deceased) Terry Smith.  She also claims that Terry Smith helped her find him when Ragland got him to open his eyes and describe the area to her.

When Ragland and her daughter were communicating with Hannah, another boy was present but she was unable to “filter out what the boy was trying to tell me”.  Ragland could not say if the boy was Ethan.

Unfortunately for the Pam Ragland media jamboree, a little over twenty four hours after Ragland’s interview aired on KFI, the authorities found James DiMaggio’s vehicle after a horseback rider spotted hikers he believed to be the missing pair.

Over 830 miles away from San Diego, California.

In the rugged wilderness of Idaho. 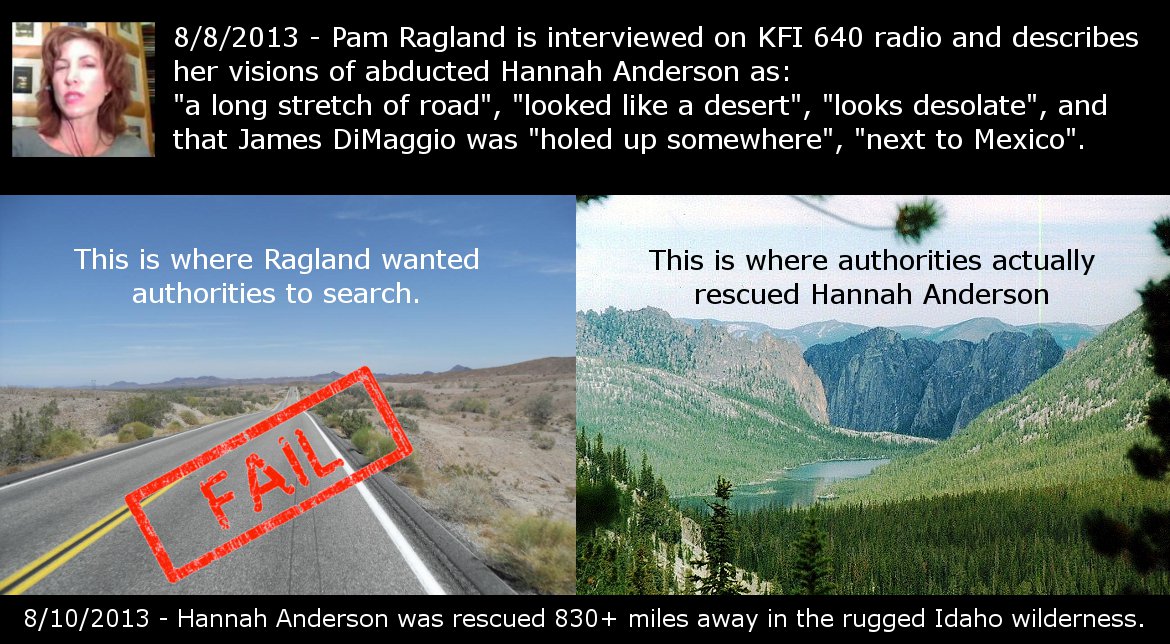 James DiMaggio was shot and killed by an FBI search team near Morehead Lake on Saturday, August 10th and Hannah Anderson was rescued.

The rescue of Hannah Anderson is such a positive outcome after the tragic deaths of Hannah’s mother and younger brother.

This does not let Ragland off the hook for her discredited claims or free her from continued skepticism. 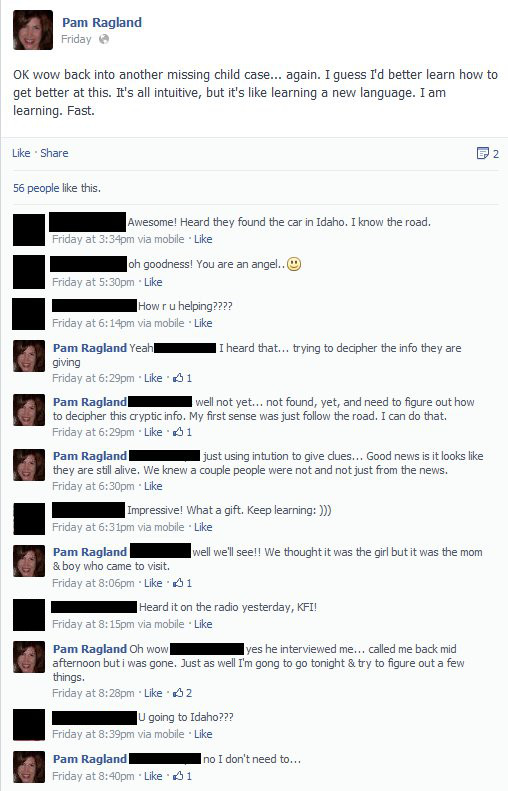 How does Ragland react when her claims completely bomb?  Tiny elements of her original claims begin to change of course!

So now the original clear visions of a desolate desert road and DiMaggio’s location now require Ragland to decipher cryptic information.  Why is it now cryptic when it was so clear before?

During the radio interview, Ragland described the “feelings” of the visions ominously as “not good” and she evaded the direct question if Hannah was alive or dead.  After authorities reported sightings in Idaho, Ragland posts an enthusiastic “Good news is it looks like they are still alive.”

Ragland now claims that it was not Hannah that she was in communication with, but the dead mother and younger brother.

The San Diego police department thankfully relies on reality based investigative techniques and did not enlist Ragland’s help by shifting any of their resources to desert roads near the Mexico border.