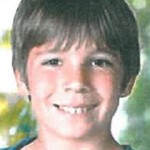 Terry Smith, an 11 year old boy recently went missing in Menifee, CA.  On Wednesday, authorities announced that they had found a body matching Terry’s description in a shallow grave under a tree behind his mother’s house.  His 16 year old half brother was arrested on suspicion of murder. 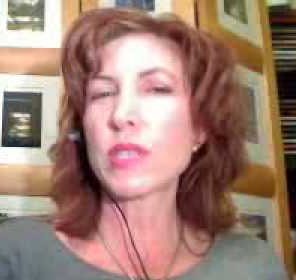 The radio station I was listening to mentioned that Pam Ragland,  a “psychic was claiming that she had found the boy’s body” but added that authorities denied knowing anything about this woman.  Ok, typical crackpot scenario.  This morning however there were several articles on various sites about Pam Ragland’s claims and that authorities verified that she was actually responsible.

A few observations about this story and Pam Ragland’s claims:

Watching the news Tuesday about the continuing search for Terry Smith, Ragland said she thought “something’s not right.”   “I got this flash and I saw the boy laying under a tree. I thought he was sleeping,” Ragland told NBC4. “There was a dirt road, and I saw this distinctive building.”

When is a missing child ever “right”?  With the constant 24/7 local news coverage of the search efforts to find Terry Smith, it is almost certain that Ragland had seen the “tree” and “distinctive building” several times on television at the family’s property.

She said she called her daughter, whom she described as “also intuitive,” and asked her to try to “talk” to Terry. Then she called the Sheriff’s Department’s tip line.  She said authorities asked her to come down to the scene; Ragland arrived with her two children on Tuesday evening. During the drive, Ragland said she had another vision – of “city lights” and the word “no.” When she arrived at the search area, she saw the view she had seen in a vision.   “It’s literally like a vision in your head, like you’re looking at something,” she said.

Umm, wat?  There was no further information on her daughter’s attempt to “talk” to Terry from 65+ miles away in any of the articles that I could find.

After contacting authorities, she drives to Menifee with her children.  While driving she claims to have another vision.  How safe are these alleged visions if you’re driving with children on either the 91 or 74 freeways to get to Menifee?  The vision this time was about “city lights”.

Take a look at the picture below. 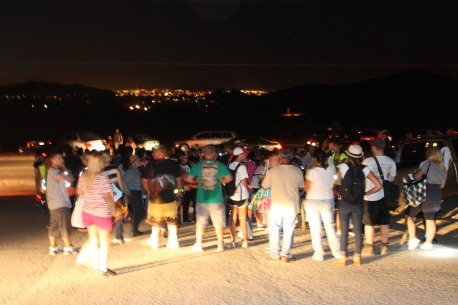 These are the volunteers searching for Terry Smith on Monday (a day before Ragland’s ‘visions’) and gathering at the Menifee Market next to Terry’s home.  Similar footage and images certainly flooding the local news coverage of the search for this child.  City lights.  Check.  Nothing supernatural about it.  If she had taken the Ortega 74 route from Rancho Santa Margarita to Menifee on Tuesday evening, “city lights” would have been the prevailing view when coming down from the hills and entering the Inland Empire.

A searcher said the city lights represented the area they planned to explore. Ragland said, “No, he’s not there.”

Why start telling anyone that would listen that you had a vision of “city lights” to begin with and the authorities are directing the search volunteers in a different area entirely?  Oh right!  The volunteers have been seeing city lights during the evening searches for the last several nights already so BOOM, instant connection and implied credibility.

She looked around and said she believed Terry was “behind the store,” referring to the Menifee Market, adjacent to the Smith home and the location where volunteer searchers had gathered.  “I had this knowing that he was in a certain direction,” Ragland said.

Here is a satellite view so you can get an idea of the area.

An off-duty firefighter offered to drive Ragland around to search, she said. During the drive, she spotted an open shed that resembled what she had seen in her initial vision. It was near the Smith family home.  The firefighter, Ragland said, convinced the Smith family to let them on to the property. There, they saw a single tree like the one Ragland had seen in her vision.

The authorities had already started to focus their investigation on the boy’s half brother and had already confined the search to the family’s property.  So there is nothing magical about Ragland arriving at the property.

The ‘distinctive building’ has now turned into an open shed and the single tree has been identified.  Again, these elements of her alleged visions can certainly be attributed to local news coverage that she and her children watched on television.

“Then I smelled something. Something that smelled dead,” she recalled.

Her children found a lump, and they called out to her: “Mommy, here’s a dead animal.”

Another human sense based in reality is again used, unfortunately probably scarring her two children for years to come.

But when she looked at the lump, she realized: “That is not an animal. That’s a head.”  As Ragland described it, a blackened, bloated head was sticking up about 6 or 8 inches. Half of the nose and an eye were missing.

That’s some ‘parent of the year’ material right there to take your two children out for a cadaver search in the middle of the night.

“I felt devastated because I thought we were going to help this family find a live child,” Ragland said.

Wait a moment… So Ragland says that her vision of Terry was wrong?

Ragland’s claims are absolutely incredible and preposterous.  A strong instinct or reaction to something unconsciously observed is certainly not a vision.  It was only a matter of time before Ragland or any of the other volunteers/police would have found the body since the search area was already focused on the family’s property. 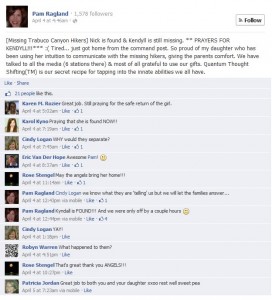 also detailed how she joined a recent search for lost hikers.  If she had any visions at that time they did not help find the two hikers.  The search and rescue volunteer teams using their own reality based senses eventually located the two missing hikers.  According to Ragland’s own Facebook posts, she was involved in the search of the two hikers in April, guiding her daughter to “use her intuition to communicate with the missing hikers” and “giving the parents comfort”.

It is  very important to note that the rescue effort at this point in time was deadly critical as the hikers were seriously dehydrated and starting to hallucinate.  The authorities estimated they would not survive the next day if they were not found.

Where was Pam Ragland?  She was busy using her volunteer search time to speak to six different TV station news crews.

Notice the pattern here yet?

If you insert yourself into enough situations with the media (within a 70 mile radius?) claiming to have visions, eventually you’ll get lucky.

It’s not as if she is going to use this terrible tragedy to make a cheap buck?  Right?  Right?

I had never heard of Pam Ragland until this week but once I started reading all this I could already smell the telltale odor of faux spiritual nonsense.  The following sealed the deal though.

Ragland, 50, does not call herself a “psychic.” She said she is a “healer,” who believes that people can hone their intuition.  On her website, Ragland said she has pioneered “Quantum Thought Shifting,” an “entirely new form of energy technology on this planet.”

Because “healer” is much more approachable for people (and their wallets I expect) than “psychic”.  I am glad that she believes that people can hone their intuition, because I’m about to let my intuition go into overdrive.

There is so much WTF quantum bullshit in that last sentence that I am at a loss as to why any of these publications printed it without admitting this was from The Onion.

I decided to look more closely at Pam Ragland and quickly discovered that I would need to make entirely separate posts to detail the nonsense that this Quantum Quackster™ is peddling.

Terry Smith’s family needs to be able to grieve in peace after the tragic loss of their son and not have to endure a constant reminder of the tragedy when psychic parasites desperately try to make a profit.

New information on Ragland’s claims regarding Terry Smith will be appended below.

7/11/2013 – Pam Ragland is briefly interviewed by KCAL-9 News.  The reporter summarizing Ragland’s explanation of her vision contradicts her previous claim.

The building or structure in her visions was originally stated as “an open shed that resembled what she had seen in her initial vision.  It was near the Smith family home.” [source]

In the video (@0:30), the structure has changed from “an open shed” to “the Smith family home” itself.  That is quite a large alteration in Ragland’s story of alleged visions that has been previously stated. 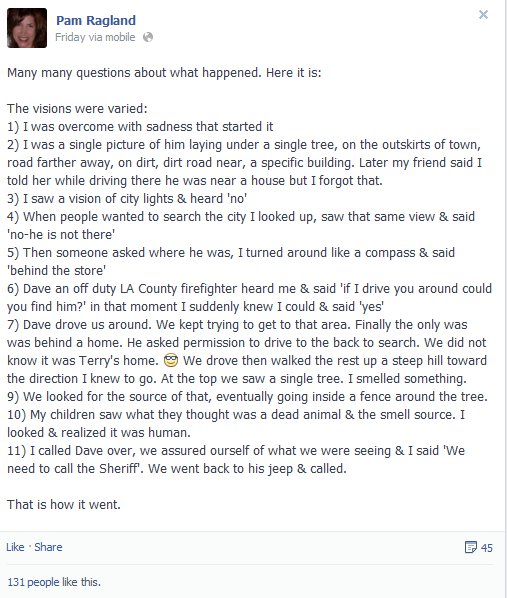 Here is a second example of the shifting of the story where the “open shed” is now “near a house”.  When the story first broke, Ragland was very specific about the distinctive building or open shed near the family home.  Now that element of the story has changed again to become the family home itself… which Ragland claims above to have forgotten about?

7/13/2013 – Pam Ragland responded to people calling upon her to take James Randi’s $1 million dollar paranormal challenge.  Not surprising that she thinks it’s “dumb and pointless”.  She completely (intentionally?) misses the point of the challenge.  Since nobody has passed even the preliminary tests, she probably would not want to expose her “talents” to such national scrutiny.

7/24/2013 – The Orange County Register had a follow-up interview with Pam Ragland and how her life has changed since finding Terry Smith.  The Register is now behind a paywall but the article can be viewed at the following link.

The 50-year-old said she saw an image July 9 of Terry Dewayne Smith Jr. lying under a tree near what appeared to be a hay barn.

Open shed, hay barn, or the family’s home itself.  The building in Ragland’s visions continues to shift.

On responding to skeptics, Ragland says:

9/20/2013 – Inside Edition aired an interview with Pam Ragland.  Read the full story and further examination of the ever changing details here:

10/2/2013 – I found an interesting comment post over at WebSleuths.com involving Pam Ragland.  During an ongoing thread discussing the disappearance of Bryce Laspisa, someone brought up the possibility of involving some psychics in the search.  Pam Ragland is mentioned and here is a cropped snapshot of one of the replies relating to the Terry Smith search.

Here is a direct link to the comment that includes the quoted context of the discussion.

Very nice to see some additional details from the volunteer center and the how Ragland was very quick to capitalize on the media attention from Terry Smith’s tragic end.

Ya’ll Need To Be Shooting That, We Getting Evaded!