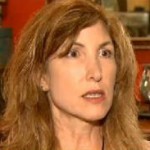 Pam Ragland has been promoting her services and special abilities for several years on her blog.  Here are a few of Pam Ragland’s more ridiculous blog absurdities and skeptical observations of her predictable nonsense.

Update: Pam Ragland’s original blog is no longer online, but images of the posts are inserted below.  Many of the pages are also archived on the WayBackMachine.  Links will eventually be updated. 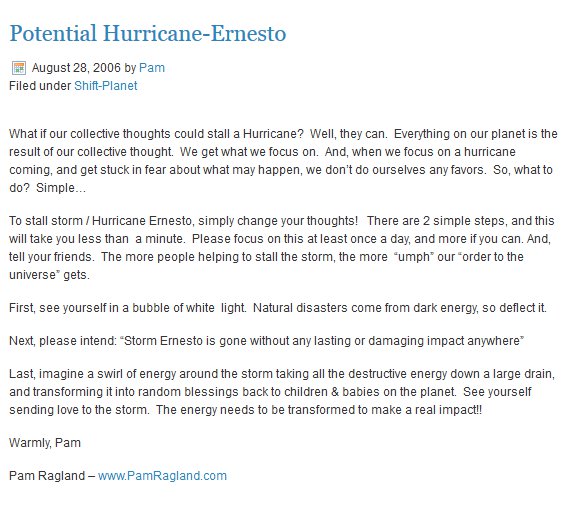 According to Ragland, natural disasters come from “dark energy” and by imagining away the destructive energy, it can be transformed into random blessings for children and babies.

Unfortunately for Ragland and others that share this type of view, natural disasters are just that, natural and their causes are solidly based in scientific reality, not vague “light vs dark” superstitions.  Hurricane Ernesto developed by a tropical wave and responsible for at least 7 fatalities and over $500 million in damages. [source]

Does Ragland ask or direct her readers to help the Red Cross or any other emergency response organization?  Nope.  Imagining away a hurricane from the other side of the country is much simpler than donating to an organization that is actually helping rebuild lives. 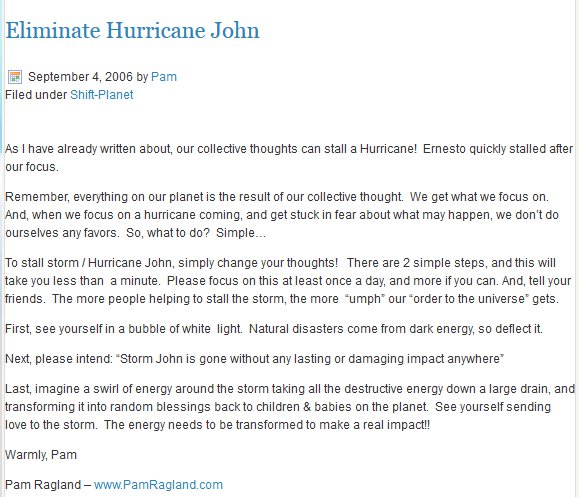 Ragland waited a whopping four days before claiming credit for Ernesto stalling and then jumping right into the next natural disaster.

Before getting to Hurricane John, I want to take one last look at Ernesto and Ragland’s credit whoring.  Ernesto began to form on August 24th in the eastern Caribbean Sea.  Ragland posted her “insights” on August 28th.  On August 31st, Ernesto re-intensified and hit the North Carolina coast.  After moving across North Carolina and into southern Virginia, Ernesto had become extratropical.  The remnants spread moisture across the northeastern United States before dissipating over eastern Canada on September 4th.  This is the typical life-cycle of ALL hurricanes when they reach that part of North America.

Hurricane John developed from a tropical wave (not dark energy) on August 28th and dissipated naturally on September 4th.  The same day Ragland makes her blog post. Interesting coincidence that she makes these posts at the end of the hurricane cycle, not the beginning. This hurricane caused 5 fatalities and $60.9 million in damages.  [source]

Does Ragland ask or direct her readers to help the Red Cross or any other emergency response organization?  Again, nope. 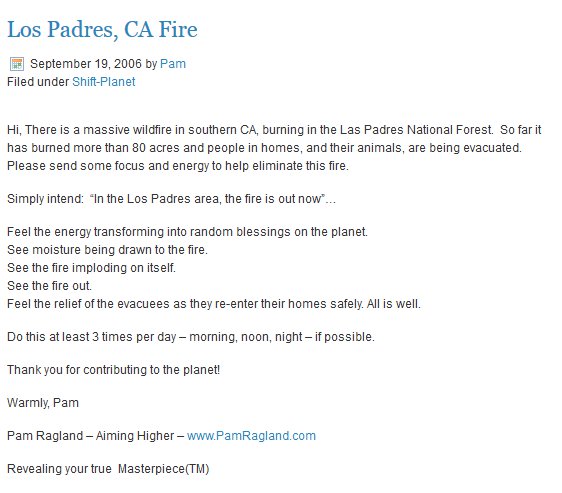 Also known as the “Day Fire”, this was the sixth largest wildfire in California history. It burned over 162,700 acres and cost $70.3 million in damages.  [source]

Does Ragland ask or direct her readers to contribute to any any emergency response organization?  Of course not. 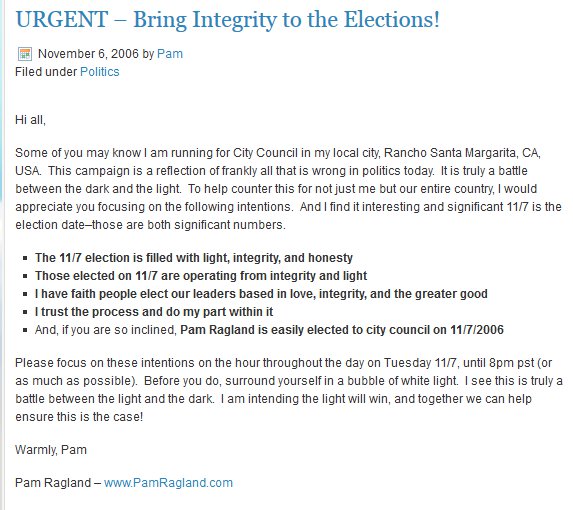 November 6th, 2006 – Ragland runs for City Council in Rancho Santa Margarita, California.  She claims that this is a battle between “dark and the light” and asks her followers to “focus their intentions” so she wins the election.  [source]

I had no idea that a city council election in a small town could be so dramatic as to describe it as an epic “battle between the light and the dark”.  So what happened?

So if the election was a battle between “dark and the light”, is Ragland the darkness?  If 8.8% is the best that can be done by “thinking” your way to an election victory, there might be an few issues with your campaign.

The Dark Portals of the Middle East 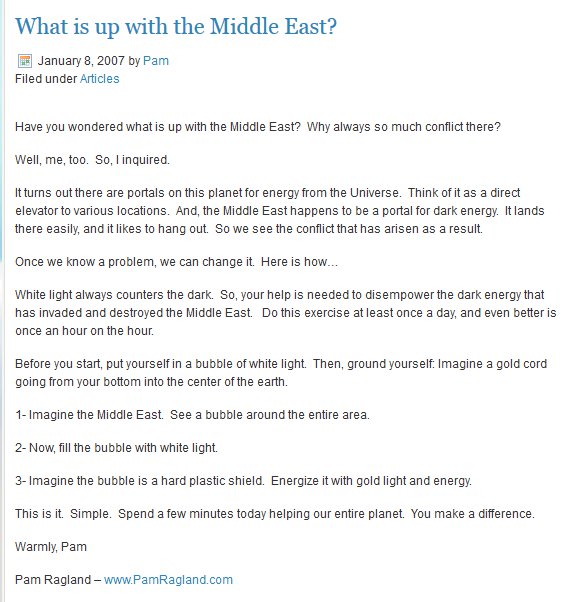 January 8th 2007 – All the conflict in the Middle East is caused by mysterious portals of dark energy that “lands there easily, and it likes to hang out”.  [source]

Pam begins to muse about the cause of the conflict in the Middle East.  How does she research and educate herself on thousands of years of political oppression, religious extremism, atrocities, oppression, ignorance, etc.?  Does she take a history class?  Go to the library?  Speak with people that have migrated away from the Middle East?

The only explanation that I could find for Raglan’s source of information about the dark portals was from a 2008 blog post.  One of her clients told her.  Here is an excerpt:

I remembered a conversation from a couple years ago with one of my clients.  That was  when I first became aware there are “portals” for dark energy on the planet.  Some might call dark energy “Satan” or an “opposing force”.  The dark is the opposite of the light or love.  Dark is heavy, evil, based in fear.  Think of dark portals as a place where the really extreme forces congregate. There they find other like minded extreme forces.

The Middle East  is the strongest portal for dark energy on the planet.

The dark energy comes like an elevator and likes to hang out in the Middle East.  If this is the “strongest portal for dark energy on the planet” as she claims, how does she arrive at that conclusion?  How is she measuring the portal strength?  Where are the other portals?  Does she have any scientific facts or evidence to back this up?  I could not find any and I doubt anyone else can either.

If all of this dark energy is the ’cause’, what does Pam Ragland recommend for the ‘cure’?

It’s easy and requires almost zero effort!  Simply imagine a bubble of white light (made of hard plastic!?!) around the Middle East and energize it with gold light and energy… I am not sure if her followers in the UK need to buy an adapter to energize their energy.

So thousands of years of ignorance, hatred, and atrocities will be magically wiped away with a few minutes of day dreaming.  Total.  Bullshit.

So, it should  be no surprise that human beings who are mostly “dark” come from this region ala the Islamic Extremists. 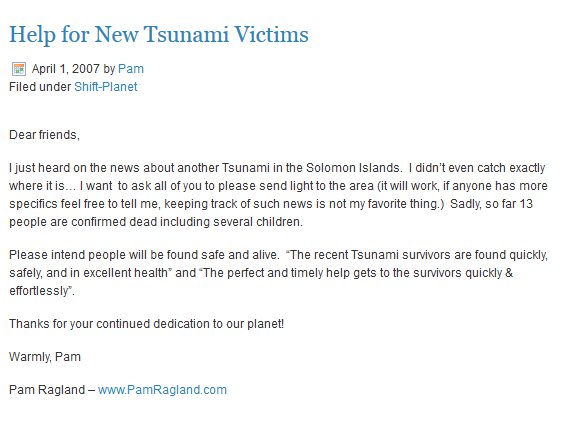 At least 52 people were killed and 60 missing when the tsunami struck the Solomon Islands, wiping out 13+ villages. Thousands were left homeless and damages were estimated to be in the millions. Outbreaks of diarrhea and measles were reported in the following weeks after the tsunami. [source]

Does Ragland ask her followers to make donations to a single rescue or emergency response organization?  No. Thinking about it would have much more of an impact rather than actually doing something to help.

Ragland’s claims in this post are particularly rage inducing.

I received this from a friend and had heard a lot of this before, given the recent pet food recalls.  (By the way, if you have a pet affected  I do have a program that may be able to help, I have a 100% success rate in saving dying animals although I have never advertised that program which is Thought Shifting(TM) for pets. But, if you pet is dying because of the pet food recall especially,or if you know someone,  then feel free to contact me.)

Pam immediately (predictably?) jumps in to shamelessly promote a new (unadvertised) program to save dying animals where she claims to have a 100% success rate.  Does she have any documented evidence to back that up?  She provides none.  If she did, I am certain veterinary clinics across the nation would like to review these claims or simply throw her out of their offices.

This is a massively irresponsible and dangerous to claim that Thought Shifting (TM) can cure a dying pet (or do anything for that matter) of food poisoning.  Does Ragland even do the responsible thing and tell her readers to immediately seek emergency veterinary care if their pets are poisoned?  No.  Pam tells her readers to:

… simply focus on our food supply being one that is full of life, energy, consciousness (we eat the consciousness of food), and safe. 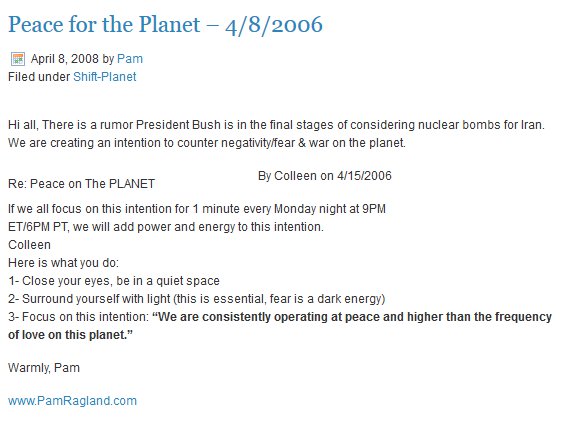 April 8th 2008 – Stop President Bush from nuking Iran by “thinking” about it.  [source]

This blog entry is confusing for different reasons this time.  Part of it appears to have been written by “Colleen” on 4/15/2006, so this is most likely a copy/paste from somewhere else.  It does not matter much though as Pam’s message is the typical “think” it away nonsense.

You only need ONE minute a week (every Monday at 9pm EST/9PM PST, oddly specific?) to operate

Sixty seconds per week is a great bargain for world peace when you think about it.

“We are consistently operating at peace and higher than the frequency of love on this planet.”

Light and Love for Terrorist Victims 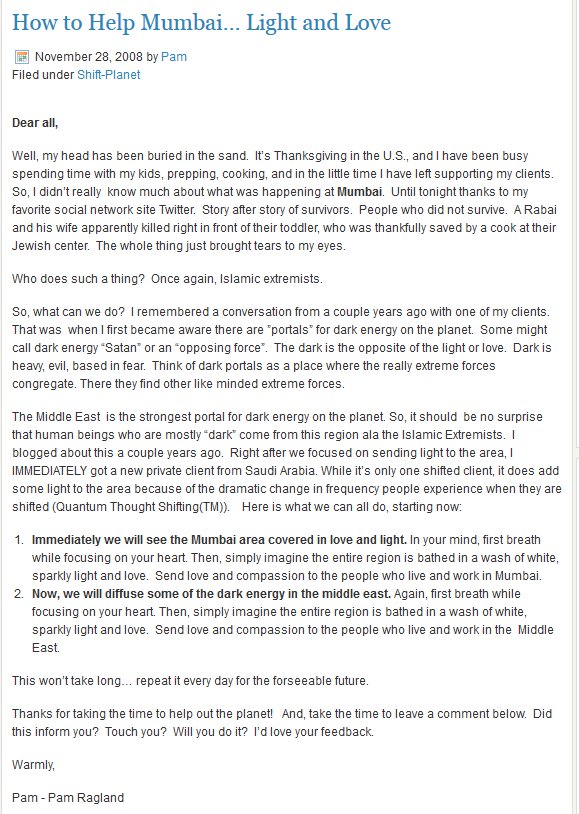 Ragland uses the Mumbai terrorist attack as an opportunity to return to the “dark portals” nonsense.  In this post, she gives the source of her knowledge; one of her clients told her about it.

Pam also takes the opportunity to bewilderingly claim that after focusing on the Middle East previously (see the January 2007 post), she goes on to say:

Right after we focused on sending light to the area, I IMMEDIATELY got a new private client from Saudi Arabia. While it’s only one shifted client, it does add  some light to the area because of the dramatic change in frequency people experience when they are shifted (Quantum Thought Shifting(TM)).

In 2008 the Middle East had a population estimated to be around 198.5 million people.  That would mean that Pam Ragland’s evidence of focusing light to the area for a single solitary person (a new paying customer no less) from Saudi Arabia works out to roughly 5.037783375314861e-7%. 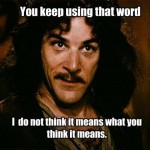 repeatedly uses certain words that sound techy but reveal a lot behind the nonsense.  In this case, the word “frequency” is an example.

The terrorist attack killed 166 people and more than 600 were injured.  Instead of asking readers to send donations to any international aid organization, Ragland recommends that everyone imagine the area is bathed in white sparkly light and love to Mumbai.

Here is a handy reference chart for Ragland’s lessons on how to deal with life: 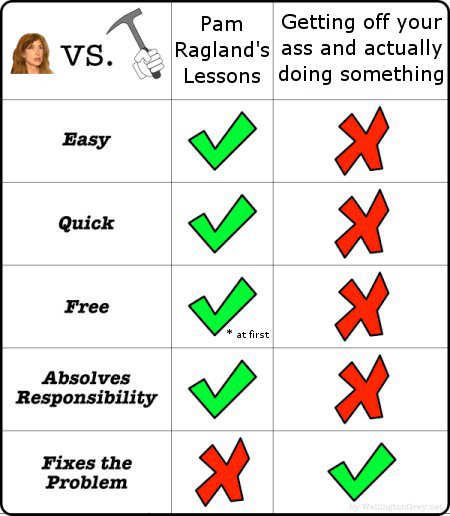