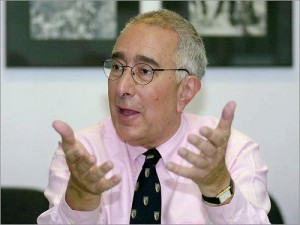 Facebook news feed with a picture and article by Ben Stein whining about Christmas Trees being referred to as “Holiday Trees”.  [skip to tl;dr]

I had fond memories of Ben Stein on ‘The Wonder Years’ and Ferris Bueller’s Day Off, but after watching the movie “Expelled – No Intelligence Allowed” and then the the video interview where Stein makes the insane claim that “science leads you to killing people“, it was obvious to me that this man had nothing worth listening to.

At first glance, the Confessions post struck me as a typical whining religious rant about the holiday season, imaginary religious persecution, and a lot of disjointed thoughts all wrapped up in a big ball of WTF.  After two minutes of looking up information….. good ole Snopes.com delivers!

Ben Stein said a few of these words back in 2005 but the “Confessions” email forward did not begin until 2009, so Stein’s words were not in reaction to the White House using the term “Holiday Trees”.  Most of the article text is actually from a television appearance by evangelist Billy Grahm’s daughter just after the September 11th terrorist attacks.  The claim that Dr. Spock’s son committed suicide is completely false.

The White House usage of the term “Holiday Trees” is completely false as well.

If all the extra garbage ( 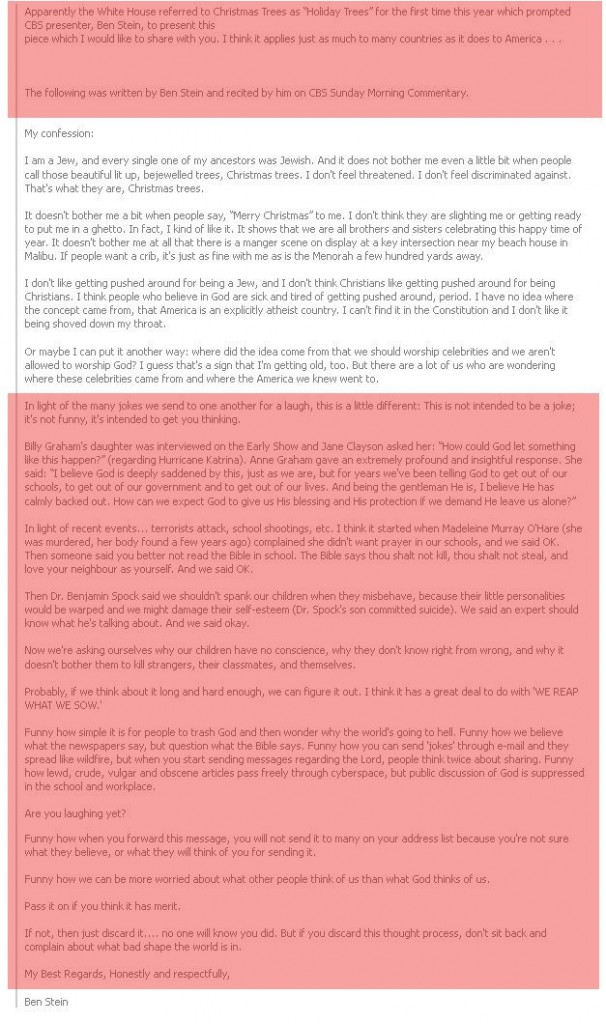 highlighted in red) that was added by other people is removed, we are left with what Ben Stein actually said…  just a smaller amount of garbage.

I added back a few lines of his dialogue to add context.  So here is what we’re left with, with my own thoughts:

BEN STEIN: Here at this happy time of year, a few confessions from my beating heart. I have no freaking clue who Nick and Jessica are.

I see them on the cover of People and Us constantly when I’m buying my dog biscuits. I still don’t know. I often ask the checkers at the grocery stores who they are. They don’t know who Nick and Jessica are, either. Who are they? Will it change my life if I know who they are and why they’ve broken up? Why are they so darned important?  I don’t know who Lindsay Lohan is either, and I don’t care at all about Tom Cruise’s baby.  Am I going to be called before a Senate committee and asked if I’m a subversive? Maybe. But I just have no clue who Nick and Jessica are. Is this what it means to be no longer young? Hm, not so bad.

The actual dialogue beings with a rant about celebrities and how he doesn’t pay attention to that nonsense.  Fantastic.  I completely agree with him regarding the worthless cult of celebrity.

He reminds us that he is Jewish, he comprehends his Jewish ancestry, and that he does not feel threatened or discriminated against.  Ok.

It doesn’t bother me a bit when people say, “Merry Christmas” to me. I don’t think they are slighting me or getting ready to put me in a ghetto. In fact, I kind of like it. It shows that we are all brothers and sisters celebrating this happy time of year. It doesn’t bother me at all that there is a manger scene on display at a key intersection near my beach house in Malibu. If people want a crib, it’s just as fine with me as is the Menorah a few hundred yards away.

I’m not sure how he made the jump from people wishing him Merry Christmas to ever consider that people were getting ready to put him in a ghetto.  I am not sure if he is trying to invoke reference to the Warsaw Ghetto.

Wait a minute.  Just a moment ago he wasn’t threatened or discriminated against and now he doesn’t like being pushed around for being Jewish?  He also announces that Christians and people that believe in God are being pushed around, although Stein does not clarify which god he is referring to though.

Stein does not provide any clarity to this bizarre claim who is actually pushing him around.  Maybe he will explain his thoughts a bit better as he goes.

I have no idea where the concept came from, that America is an explicitly atheist country. I can’t find it in the Constitution and I don’t like it being shoved down my throat. 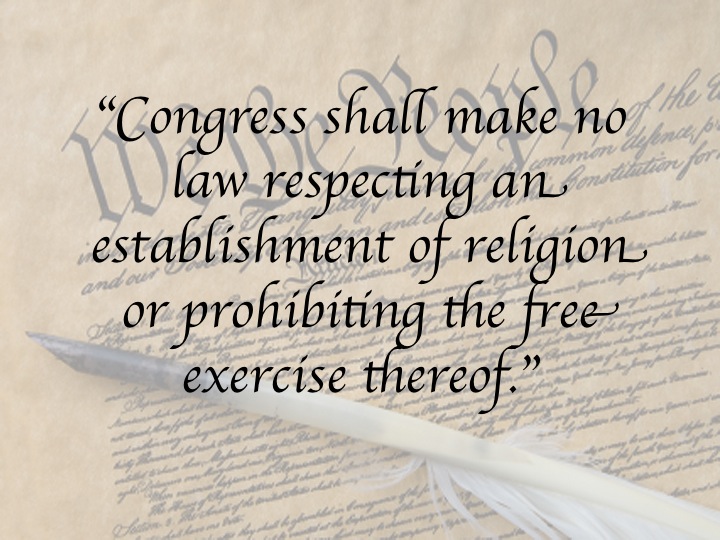 Seriously?  Now someone is shoving the concept of an atheist country down his throat?  Mr. Stein again does not provide any explanation of who is shoving stuff down his throat.  Perhaps Ben Stein missed or flat out ignores the the First Amendment to the Constitution, as it spells out the religious expectation quite clearly.  The concept of a secular vs atheist society is completely beyond Mr. Stein’s understanding.

Or maybe I can put it another way:

Huh?  But you just said… oh ok fine… try to put it another way then….

where did the idea come from that we should worship celebrities and we aren’t allowed to worship God?

Ok, now Mr. Stein has completely lost his fucking mind.  This is not only a laughable statement, it is also extremely false and dishonest.  Stein’s lack of rational thinking shines here with a straw man fallacy to make a ridiculous claim.  How is he or anyone in this country being prohibited from worshiping their god(s)?  They are not.

I guess that’s a sign that I’m getting old, too. But there are a lot of us who are wondering where these celebrities came from and where the America we knew went to.

Ahh, worthless nostalgia to close us out.  Every generation looks back at the ‘good ole days’ and compares it to the struggles of the present.

Even with all the extra garbage removed, Ben Stein’s whining rant from 2005 contains nothing to be admired.