A bizarre dinosaur had vampire- 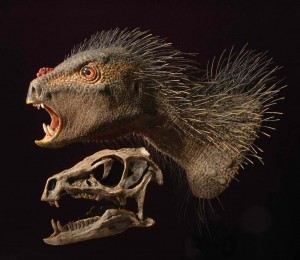 like fangs, a parrot beak and porcupine bristles, researchers say.

The ancient creature, which was found 50 years ago in southern Africa but drew relatively little attention until now, may shed light on the evolution of the major group of dinosaurs that included famous giants such as Stegosaurus and Triceratops.

International Space Station in front of the Moon